Pivotal officially launched Wednesday morning with “Pivotal: A New Platform for a New Era,” a livestreamed event unveiling the Pivotal One platform and announcing a $105 million investment in the new company by General Electric. Pivotal CEO Paul Maritz set the tone with his opening declaration, “At the end of the day, it’s all about the applications.” This statement was reiterated throughout the event, emphasizing a fundamental belief within Pivotal: for all the hype surrounding big data, sophisticated data analytics, and cloud infrastructures, their value will depend on how effectively they enable companies to rapidly deliver useful products to their customers.

Maritz spoke of the massive industry shift that Pivotal aims to address: “the need to bring consumer-grade capabilities back to the enterprise.” Just as consumer web companies such as Google and Facebook have done over the past decade, an increasing number of businesses must store and ingest large amounts of data, rapidly and effectively reason over it, in the service of delivering new applications and features to customers. “History teaches us that when the data fabrics change, just about everything in our industry changes as well,” Maritz stated.

Maritz cited two other catalysts for this shift — achieving scale at a level only possible through automation, and the emergence of pervasive telemetry. With the advent of intelligent, networked machines — popularly known as “The Internet of Things” — Maritz projected the amount of data companies will need to ingest and react to in real time will increase by two orders of magnitude.

The goal of the Pivotal One platform is to equip large companies with the cloud, analytics, and rapid development capabilities of the large consumer web companies, while serving the unique needs of the enterprise, Maritz noted. A next generation platform-as-a-service (PaaS) must be capable of communicating with legacy software, and be cloud-agnostic. “There isn’t going to be one cloud that meets everybody’s needs,” Maritz said, stating that not all enterprises will use consumer cloud infrastructures. Pivotal views cloud infrastructures “as the modern equivalent of hardware,” he said, emphasizing the need for a PaaS that is compatible with a wide range of public and private clouds.

Scott Yara, Senior VP of Products and Platform, provided further details on the Pivotal One platform, and emphasized that it was far more than another big data solution. “Pivotal views data as only a part of the picture,” he said. “Pivotal One is making analytics a default capability for any enterprise.” Centered on cloud independence, data processing and services, and a modern application framework, Pivotal One is a PaaS designed to enable scale, automation, and rapid software development, he added.

In Yara’s view, Pivotal’s developer-oriented outlook is central to delivering on the platform’s promise. “What makes Pivotal special is depth of developers, technologists, and open source projects being leveraged to build this platform,” Yara said. “We are standing on the shoulders of giants.” Pivotal boasts 700 developers working on the Pivotal One release, scheduled for Q4 2013.

Scott Yara, Senior VP of Products and Platform at Pivotal

“A complete PaaS for the enterprise has to serve the needs of the application developers,” Yara said, detailing the three layers of Pivotal One. Cloud Foundry, the open source “operating system for cloud infrastructure,” serves as the basis for Pivotal One’s cloud capabilities. The data fabric is powered by Hadoop-derived Pivotal HD, which Greenplum previewed in March. “You can’t have an arm’s length relationship with the data platform on a modern PaaS,” Yara said. Rather than moving data in and out of remote locations, companies need an integrated platform capable of clustered file storage, sophisticated analytics, and real-time interaction with data. These cloud and data fabrics serve Pivotal One’s application development framework, derived from Spring, the Java development community, and Pivotal Labs. The application framework prioritizes rapid development, testing, and deploy of applications, and the ability to automatically scale on demand.

“When you’re building applications that needed to be accessed on the web and mobile devices, service binding is really important,” Yara said. No matter the language an application is built in — Java, PHP, Ruby — it “needs to be instantly instrumented for analytics capabilities.” He noted that the open source technologies underpinning Pivotal One is another key differentiator, preventing vendor lock-in. Gesturing to this commitment, Yara announced that Cloud Foundry will run on both Amazon Web Services (AWS) and VMware cloud infrastructure this quarter. This was a point that Maritz underlined, emphasizing that despite Pivotal’s EMC and VMware heritage, the company is an independent entity and will support AWS, OpenStack, and numerous other architectures.

Bill Ruh, VP of General Electric, joined Maritz to discuss the company’s $105 million investment in Pivotal, and the advent of “the industrial internet.” “The last decade has been about the consumer internet, this decade is about the industrial internet,” Ruh said, a convergence of intelligent machines, big data analytics, and a mobile workforce. Intelligent machines represent a “foundational change” to the industries GE serves, such as aviation, healthcare, and energy, he explained.

Embracing this transition to the industrial internet, Ruh announced that GE’s Software Center of Excellence in San Ramon, CA will standardize on Pivotal One’s data analytics and cloud architecture. Pivotal One’s unified PaaS will enable GE’s customers in these industries to rapidly ingest, analyze, and react to the wealth of new information produced by its intelligent machines. Ruh cited aviation as an example: a single 777 transatlantic flight generating roughly 30TB of telemetry data, he explained. Being able to collect and aggregate that data after every flight lands will enable carriers to more effectively predict future failures and react to them earlier, optimize fuel burn, and deliver more effective service to their consumers. “The productivity gains you get are huge,” Ruh said.

Ruh echoed the sentiment that the value of data lies in the tangible results delivered, pointing to smart grids as an example. “You’re building a smart grid,” he said, “but what are you going to do with all of that data?” The value of “instrumentalizing the grid,” he stated, comes from the better management of resources and demand, increasing the efficiency and the effectiveness of the power grid. This point gets at the crux of GE’s commitment to the Pivotal vision. “Rapid application development really resonates with us,” he said, with the company focused on “creating all kinds of new services — over the next decade there will be hundreds and hundreds.”

For more details, you can watch a recording of the launch event at gopivotal.com/launch, learn more about the Pivotal One platform, and follow @gopivotal on Twitter. 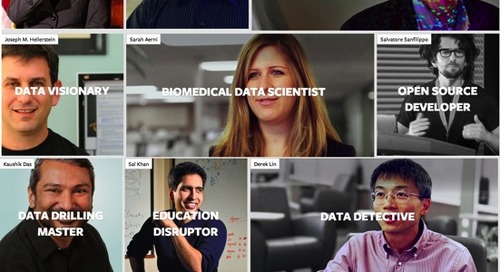 The Pivotal People Changing the Way We Live

Test pollution manifests itself as seemingly false negatives or false positives in a test suite. It occurs ...