Automation, testing, and pipelines are the golden trinity for productive development teams. By building and testing your code in an automated pipeline you get the following benefits:

This learning path works through building an example continuous integration and delivery (CI/CD) pipeline step-by-step using the setup shown in the diagram below. Following cloud native principles, this pipeline builds a single binary image, which is the one deployed to test as well as production environments. This way, you know you are running the same thing in production that you have already tested. The other goal for this pipeline is to have a setup that could be easily reproduced on another cluster, so as much configuration as possible is stored in the source code repository.

Although this learning path is presented as a tutorial to follow along, the pipeline here is intended to be a starting point for you to build something appropriate for your environment. There are lots of ways this simple example can be refined, and there are suggestions for items that you might do differently as you go through the process. Some of the technology choices (for example, minikube) were driven by what you might reasonably expect to be able to run on a developer laptop.

The diagram below shows the overall picture of this example, which consists of a single Kubernetes cluster running Jenkins, kpack, and the application test and production environments, each in separate namespaces. Docker Hub, Github, and the application databases are all outside the cluster. 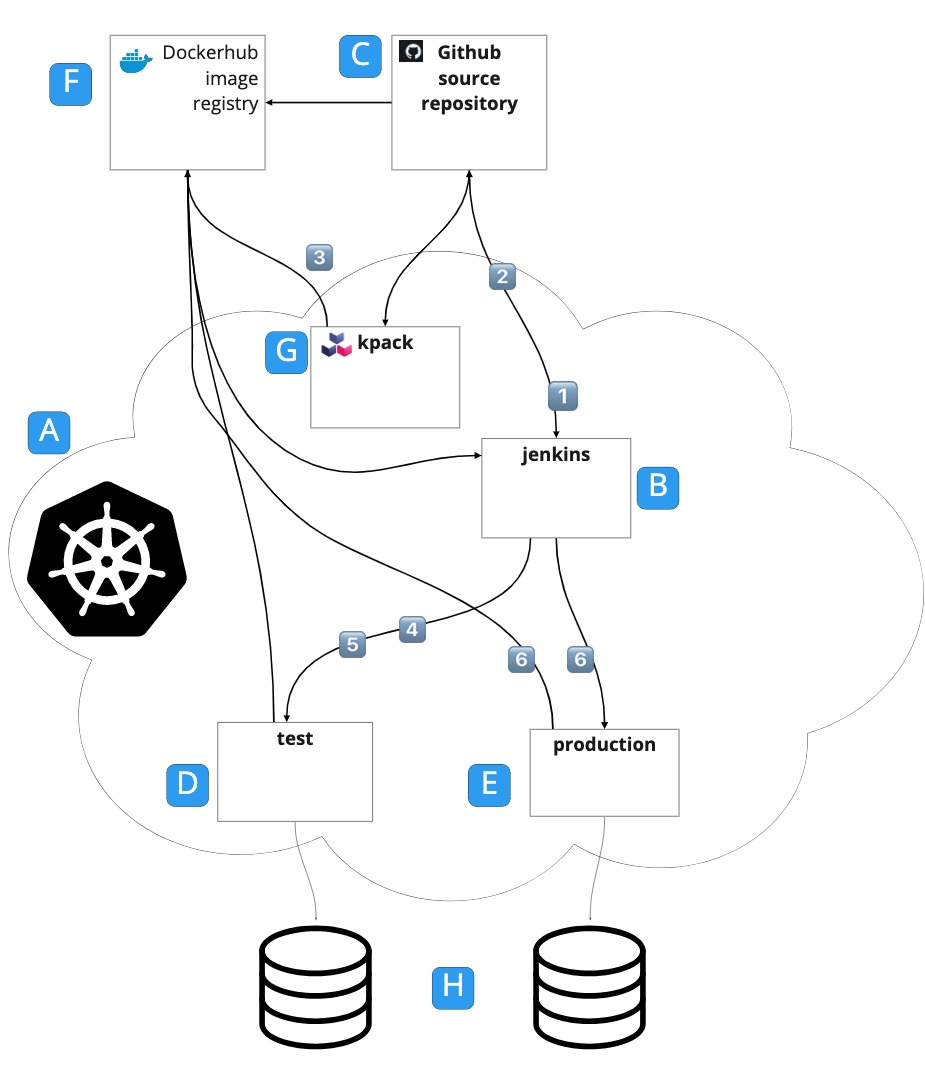 These are the items in the diagram above:

Each time code is committed to the main branch on the source repository, the following happens:

The pipeline shown above is built with Jenkins as it is the most well-known CI tool, is very flexible, and works well in heterogeneous environments. However, Jenkins can be complex to set up and administer, and unless you are careful you can create “snowflake” Jenkins environments that are difficult to reconstruct when something goes wrong. Here, you will deploy Jenkins using a container image and configuration that can mostly be reconstructed from configuration files that can be stored in source control.

This article assumes that you have some basic Kubernetes knowledge, and that you are familiar with editing YAML files. The following is a list of the software you need to have set up on your machine before starting: