Test Driven Development (TDD) is a software development practice where a test case describing desired functionality is written before the production code. When that test is executed, it fails because the supporting functionality does not exist yet. After writing the minimum functionality to satisfy the test parameters, the code is refactored to improve the design. This cycle is repeated until all requested functionality is implemented. These tests serve as a guide for development of the production code by acting as the first “client” or “user” for the system. In addition, the tests provide a regression suite for the completed code. 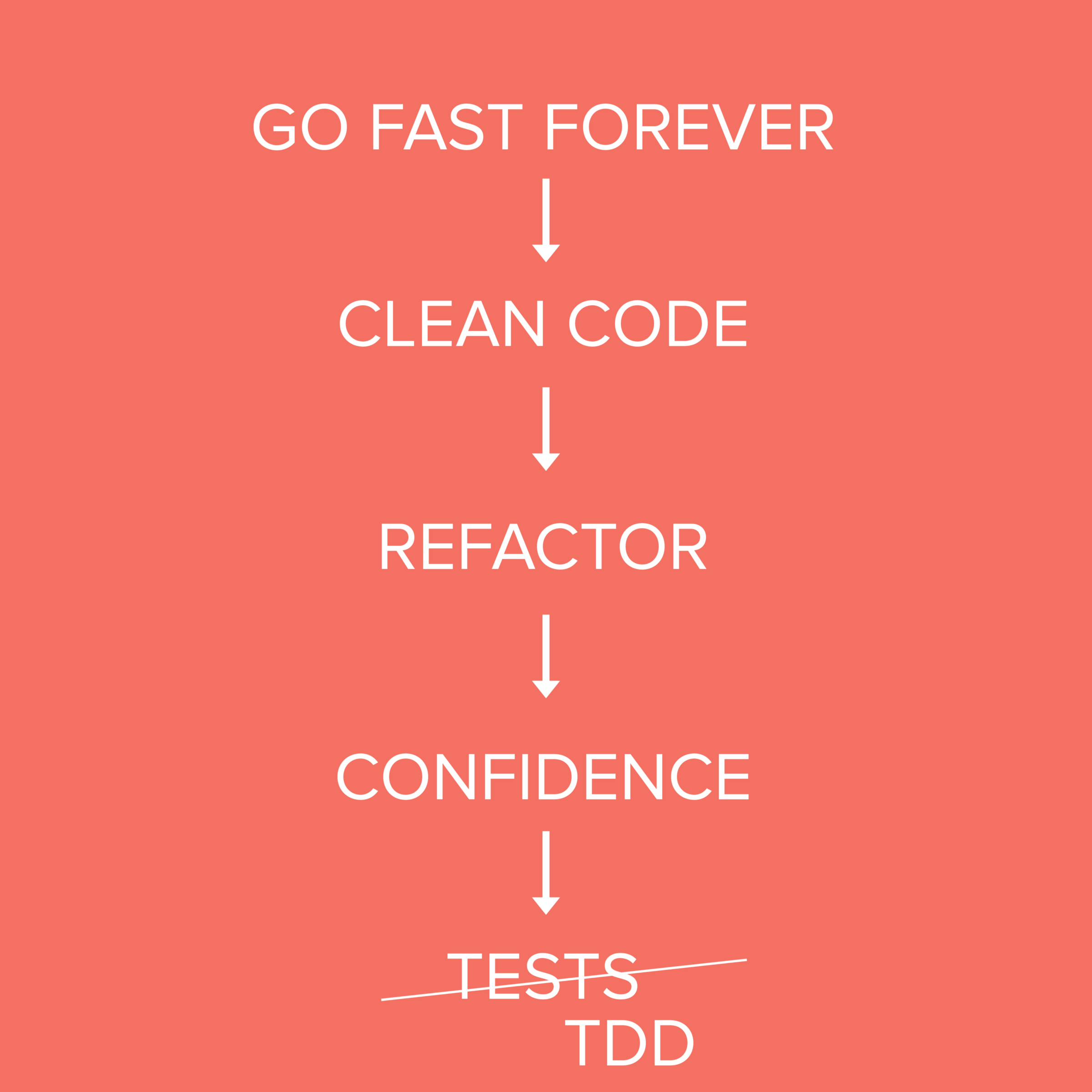 What you will learn

In this article, you will learn to:

An End-to-End test exercises the system using the same interface that an end user would use.

End-to-End Tests are relatively slow to run because simulating a user’s interactions, such as clicking buttons, uploading images, or API network calls can be slow operations. However, End-to-End Tests can give a team confidence that no user-facing interactions are broken when code changes are made. When writing End-to-End Tests, covering the major, important user flows allows a high measure of confidence while minimizing the time it takes to run a test suite.

When writing an End-to-End Test after feature(s) have been implemented, the team risks reinforcing incorrect behavior. For example, in a website you might build a test that replicates an existing navigation path even though that navigation path is incorrect.

When test driving, you might first write a navigation test that runs “click link A, then button B, then confirmation C” in correspondence with a new user story even though that navigation path does not yet exist. While implementing the functionality, run the tests regularly to verify the following one-by-one:

When everything passes, the user story is done.

A Unit Test exercises a small part of the system that is isolated from the rest of the system. Sometimes it is a single class, file, or function, but it can also be a set of these that operate together through a single public interface.

Unit Tests are used as the primary design tool for inter-class interactions within a system. Because you are constantly running these tests to shape the system, you want to keep the feedback loops as quick as possible. By isolating these tests from the rest of the system and external dependencies like databases or network calls, they can run quickly for maximum speed of feedback.

As with End-to-End testing, writing tests after the production code is implemented risks reinforcing incorrect behavior. For example, you might observe that a function performing a complex calculation returns a value of “4200” and write that into your test validation, not realizing the correct calculation is “-4200”.

With test-driving, you set up the expected value in your test, asserting the calculated value is “-4200”. This test fails because you have not implemented the calculation yet; but, you’ve already worked out what the value should be in your test. Using this, you can implement the function and have confidence its correct when the test passes.

Because they are “smaller” than End-to-End Tests, they can be useful in tracking down bugs because they encompass a smaller part of the system. However, because they are “bigger” than a Unit Test, they do not allow for the fine grained design feedback that you get with unit tests.

As you’ve learned above, tests can be written at different levels of the system. At each level, there is a balance between speed of execution, the cost to maintain the test, and the confidence it brings to the correctness of the system. 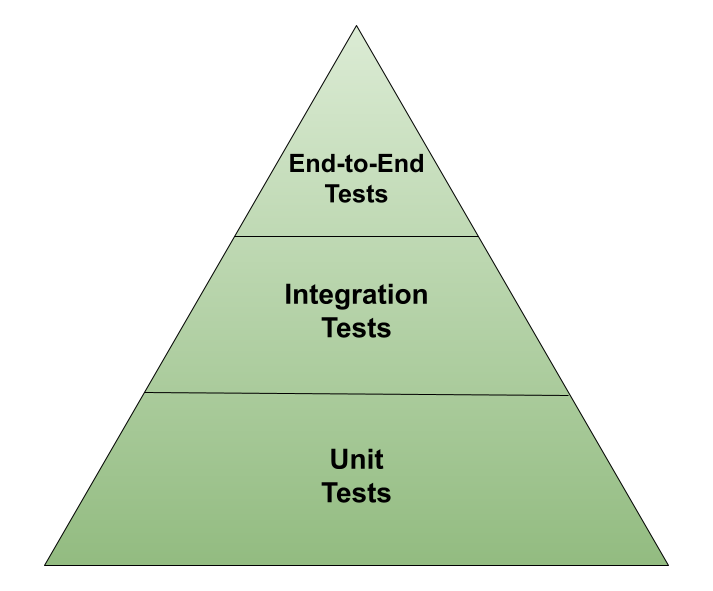 In addition, changes to the user interface might require significant End-to-End Test rewrites even when the underlying functionality has not changed. These, and other related factors make End-to-End Tests “expensive” to maintain. You want to minimize the number of these to keep the test suite running quickly and minimize maintenance headaches while still covering the key flows of the system, either from a user interface or an API endpoint.

Unit Tests: Highest number and least expensive. You want the most Unit Tests in your test suite because they are the key way to design highly cohesive, loosely coupled software. Because you have kept them running quickly, the number of tests should not adversely affect the running time of the test suite. Also, the isolated nature of unit tests means changes in one area of the system do not require changes to other areas, making maintenance of Unit Tests minimal.

Integration Tests: somewhere in the middle. You want more Integration Tests than End-to-End Tests because they balance speed of execution and test maintenance with coverage of the system. However, too many Integration Tests can quickly slow down a test suite and make the feedback from the Unit Tests decrease in value.

A slow test suite is a signal that your testing pyramid might be “upside down” and you should focus more on Unit Tests to drive the design, and ensure the correctness of your software. 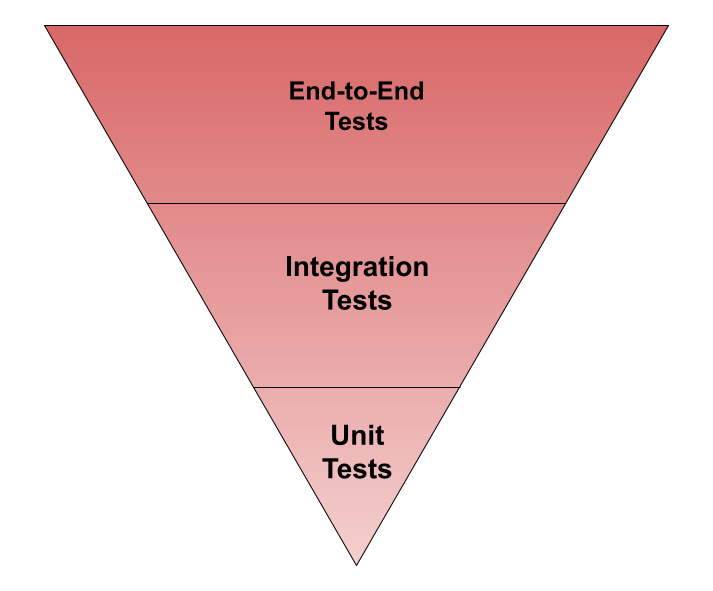 TDD gives teams the confidence to refactor application code to keep it clean so that they can go fast forever.

Going fast for a while 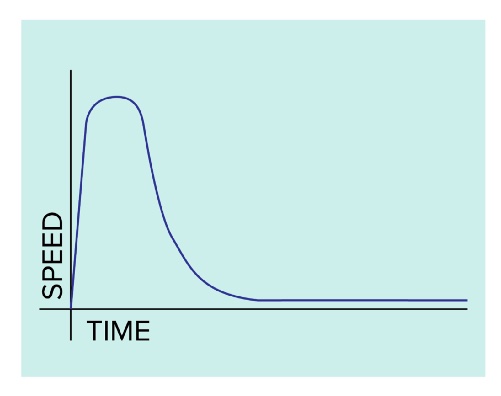 Even small changes become increasingly complex due to highly coupled modules. Why? 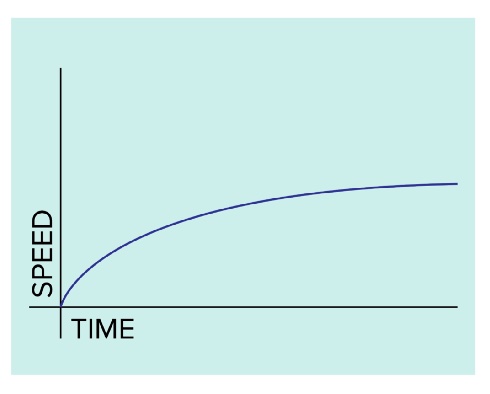 In the second diagram, the codebase does not resist the addition of functionality as time goes on. Instead, it gets to a steady state of change velocity regardless of the length of time since the start of the project.

Changes are less complex, thanks in part to TDD helping enforce highly cohesive yet loosely coupled modules. Why?

There is a cost to these benefits. The initial sprint of functionality does not go as fast as forgoing TDD. This cost is the investment in writing tests before production code and only writing enough production code to make the test pass before writing another test. These tests serve as the guardrails that give the team the confidence to continually refactor their code to keep it clean.

In this article, you learned to: