Before you begin, there are a few tools you will need:

You can see the completed example on GitHub.

Setting Up the Message Brokers

To simplify the setup of both RabbitMQ and Kafka, you can use the docker-compose.yml file included with the example:

You can actually get up and running with consuming messages from the message broker of your choice in just a few lines of code. In your pom.xml file, you’ll only need to include Spring Cloud Stream, as well as the binder of your choice. In the case of RabbitMQ, it would look like this:

From here, all that remains is setting up the Consumer that will handle receiving messages, then writing the code to do something with that message. Consider the following example, which takes in a message, converts it to uppercase, then logs it to the console.

Here, a bean of type Consumer is created, and since this is the only bean of that type, Spring will automatically use it to handle incoming messages from the RabbitMQ binder. In this example, each message will come into the function, capitalized, and then printed out to the terminal. That’s all that is required to start consuming messages, and you can actually run this code as-is:

This will compile and start the code and then attach it to the RabbitMQ servers you set up using Docker Compose, which will be listening at localhost:5672. Since this code only listens for messages, you’ll still need a way to send them. For that, you can use the RabbitMQ Management UI, which can be reached at http://localhost:15672/ with the username guest and password guest. Once logged in, choose “Exchanges” from the top navigation. You’ll notice a whole list of exchanges, but one should stand out: Spring Cloud Stream automatically set up an exchange for us, named toUpper-in-0 ! 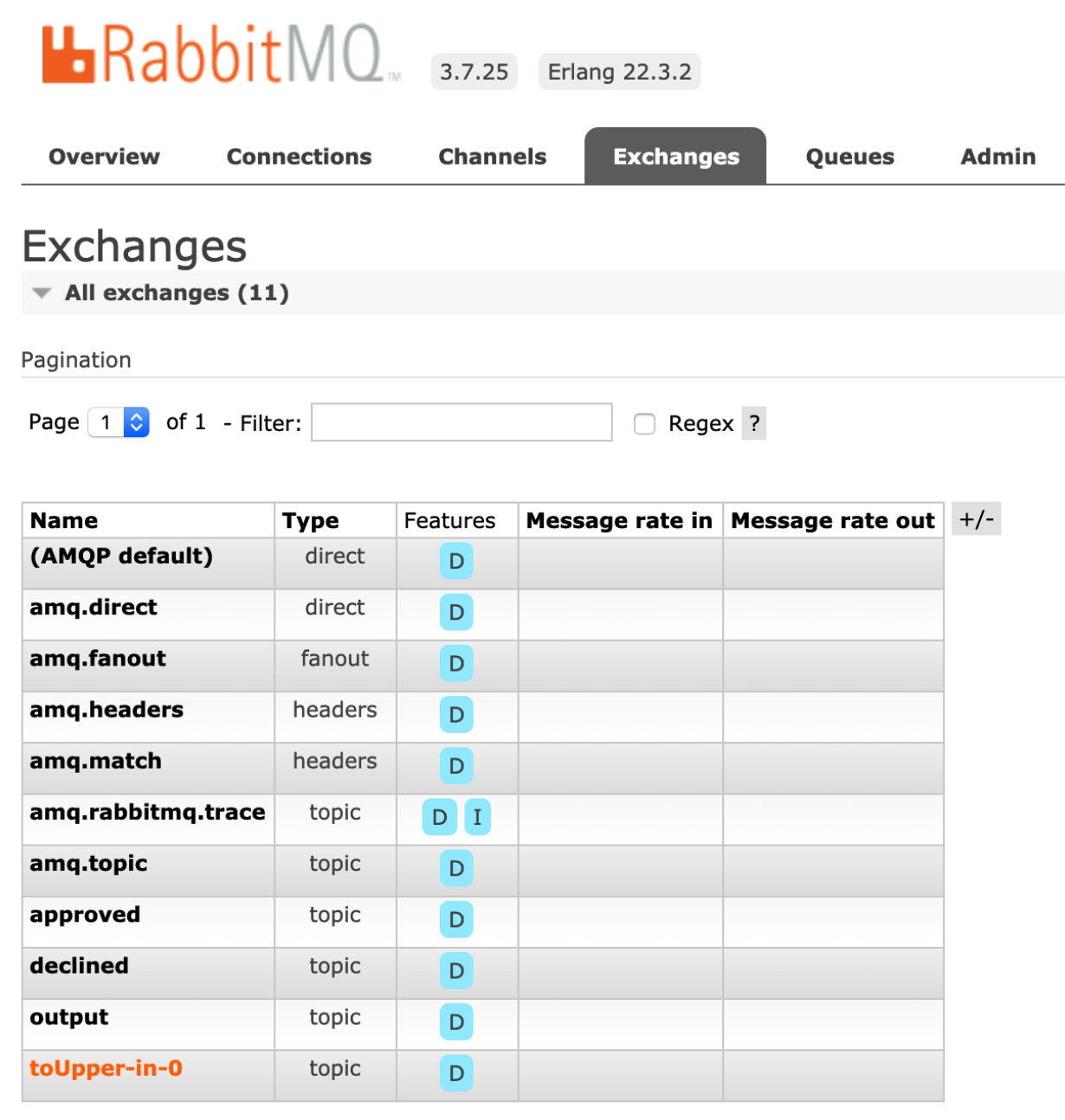 Click on the toUpper-in-0 exchange and you’ll be taken to a collection of information about it, as well as a way to easily publish messages to it. Expand the “Publish Message” section if it’s not expanded already, type in the message of your choice, and click “Publish Message.” 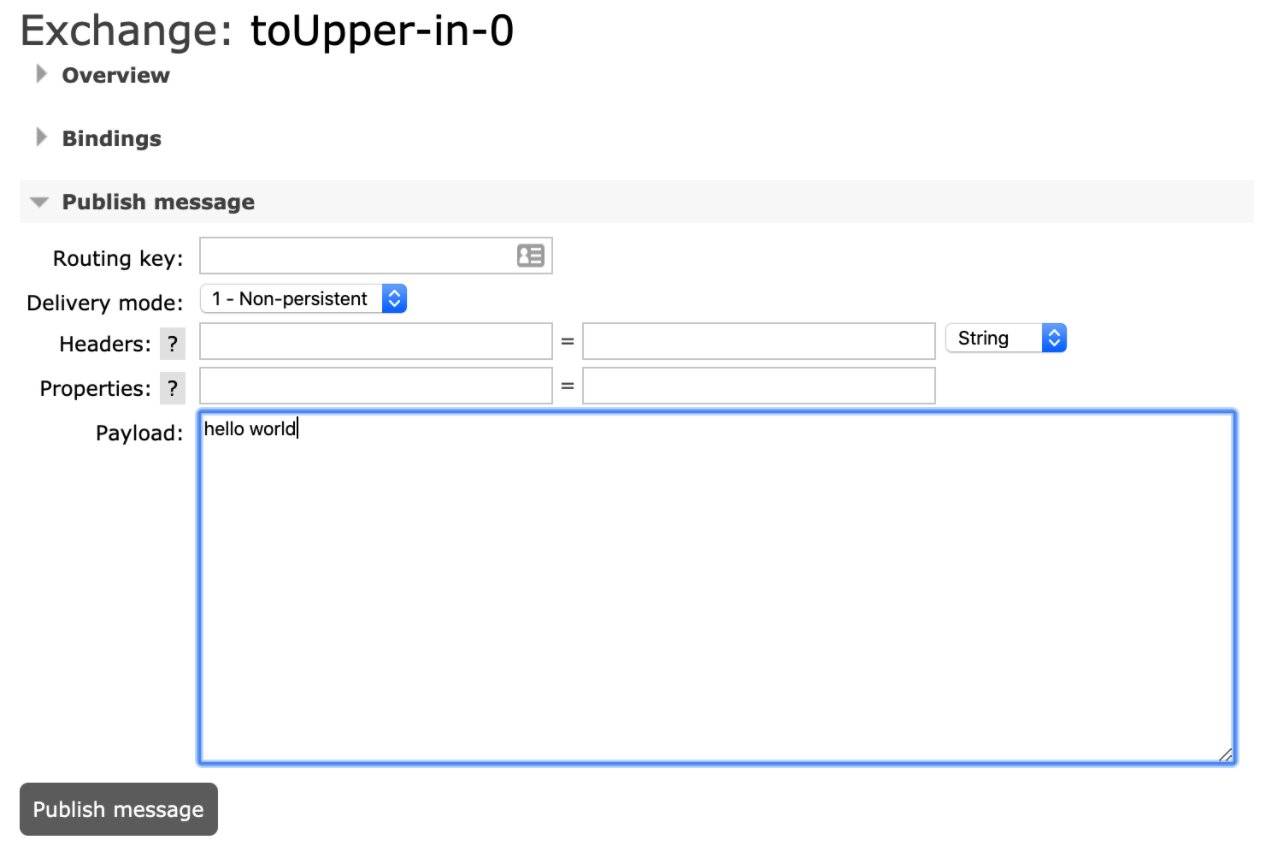 Watch the terminal running your code and you’ll see your message written to the console, but all in capital letters:

Great! With the basics covered, you’ll have a bit of context for the loan check example.

This demo also ships with two binders—one for RabbitMQ and one for Kafka—to demonstrate that your code isn’t specific to one particular message broker. Rather, the communication between application and message broker is handled entirely by Spring. That said, there are subsequently a couple of similarities between the two applications that should be called out.

First, the pom.xml file of each application has two profiles defined: one for RabbitMQ, and one for Kafka. Whichever profile is active will determine which binder is used in your code:

Here you can see the rabbit profile, which brings in the spring-cloud-stream-binder-rabbit dependency. Likewise, there’s a similar one for Kafka.

Second, both applications will include a resources directory in the source code where you will find configuration files for both RabbitMQ and Kafka. The configuration included is minimal and largely cosmetic; it merely changes the application name and startup banner. The code would actually work without this configuration since the message brokers are running on localhost and their default ports, but it’s worth pointing out nonetheless.

This code introduces a new concept: the Supplier interface. There’s quite a bit that goes into the Supplier interface and it’s highly recommended to read through the documentation. Additionally, Spring will recognize that this is the only Supplier bean defined, and use it as the default method for emitting messages to the message broker. You can see how the interface is used below:

Here you can see that Supplier will randomly generate a new Loan object and then return it. No additional configuration for this Supplier has been added, so by default it will trigger once a second. You’ll also notice there’s no information on how to serialize the Loan object to be transmitted to the message broker. Since the Loan object has proper getters and setters, the binder will be able to automatically serialize this object to JSON when it’s ready to be sent to the message broker.

This code is ready to run! Since RabbitMQ was used in the example above, go ahead and use it for this example as well:

This will start the code, activating the rabbit profile, and in turn activate the RabbitMQ binder. If you’d rather use Kafka, you can replace -Prabbit with -Pkafka. After a few moments, you’ll see the application connect to the message broker, begin generating loan applications, and start sending them to RabbitMQ!

Now that you’re sending loan applications, it’s time to build the other end and begin checking for them. First, take a look at the loancheck application, where you will find a lot of similarities. Notably, you’ll see the same profile definitions in the pom.xml file, as well as the same configurations for RabbitMQ and Kafka in the /loancheck/src/main/resources directory. In the src directory you’ll find the same Loan.java and Statuses.java files. However, there’s a bit more going on in there. The loancheck application will take in a loan, determine if it’s approved or not, then send it to one of two output queues: one for approved applications and one for those that are declined.

First, take a look at the code in LoanProcessor.java. This code explicitly defines each channel, since there are two output channels and Spring cannot implicitly determine when to use which one.

Note the three variables defined at the top of the interface. By default, in the loansource application, Spring Cloud Stream defines a channel named output to use for generated loan applications. To match it, the code creates an @Input using the same name so that it’s reading from the same channel. Additionally, two @Output annotations are used to create two channels, one for each output.

Next, check out the LoanChecker.java file:

Here you can see where the real logic of this application lives. What’s most important to note is the StreamListener annotation; notice that it’s referencing the LoanProcessor.APPLICATIONS_IN defined in LoanProcessor.java. This is how Spring will know to invoke the checkAndSortLoans() method when it receives a new message. Next, this method will inspect the loan application and determine if it should be approved or declined (based on the amount being asked for). Finally, the code will get the appropriate channel to send the result to from the processor—with processor.approved() or processor.declined()—wrap up the object with the MessageBuilder in the message method, and send it to the message broker.

Like the loansource application, this can be run using Maven, activating the rabbit profile. If you’ve chosen to use Kafka instead, make sure to use the Kafka profile with -Pkafka.

Once the application starts, it begins receiving applications and sending out the results:

Hopefully you’ve now learned how Spring Cloud Stream allows you to implement messaging in your code in an easy and portable way. If you’d like to learn more, be sure to check out the Spring Cloud Stream page on spring.io where you will find reference documentation as well as more great guides and samples.