This document details platform monitoring and alerting for Kubernetes clusters, such as those provided by Tanzu Kubernetes Grid (TKG). It covers architectural considerations, best practices, and will provide guidance for offering alerting and monitoring to resident applications . This document represents how the VMware field team approaches monitoring in large enterprise Kubernetes environments.

For new implementations of monitoring, it is suggested to run Prometheus inside of Kubernetes. The recommended approach is to utilize the existing kube-prometheus repository provided by CoreOS (Red Hat). This project allows an administrator to deploy and tune an end-to-end Prometheus solution within a Kubernetes cluster. It contains the following components:

kube-state-metrics is a first-party project of Kubernetes. Running as a DaemonSet on the Kubernetes cluster, this component generates metrics from API events that occur within Kubernetes. Its focus is on exposing events related to Kubernetes objects within the cluster in a raw and unmodified format.

Prometheus is a CNCF project widely used for Kubernetes platform monitoring as well as metrics collection and aggregation. Prometheus works by scraping data from configured endpoints, parsing it and storing it in its internal time-series database. This data can then be easily queried directly with PromQL, or displayed using a visualization tool such as Grafana.

Prometheus has push-gateway facility as well, for instrumenting applications with the available client libraries to push metrics when exposing an endpoint to scrape is not suitable. Ephemeral jobs such as pipelines are a good example of tasks in which pushing data to the metrics server make sense.

node-exporter is a separate binary in the Prometheus project. It exposes metrics for underlying container platform, os, and hardware of each Kubernetes node to be consumed by Prometheus. It can be configured with various collectors to determine what kind of system data to be provided. The node-exporter is implemented as a DaemonSet running as a service on each node in the Kubernetes cluster.

k8s-prometheus-adapter is an agent that runs as an application Deployment in your cluster. It is an implementation of the Kubernetes resource metrics API and custom metrics API that acts downstream of Prometheus to provide feedback on applications using metrics data. It implements HorizontalPodAutoscaler functionality that can react and scale applications based on real-time metrics data.

alert-manager is the handler for alerts sent by the Prometheus server. Alertmanager handles integrating with external services by responding to metric-related events such as notifying email, PagerDuty, or OpsGenie. Alertmanager provides a CRD that can be tuned via replica-count and other parameters.

Grafana is a second UI layer that is optional, however provides much more flexibility in visualizing metrics data through the creation of custom dashboards. Grafana is suggested for operational environments because of its rich set of RBAC, authentication, and customizable dashboards.

In order to install platform monitoring, clone the kube-prometheus git repository and apply the manifests specified in the install guide:

kube-prometheus is installed by simply applying the manifest to the existing Kubernetes cluster. In order to access the Prometheus, Alert-manager, and Grafana UIs, their Service will need to be exposed. Depending on the security-model and end-users, they can be exposed publicly via DNS, or temporarily using kubectl port-forward . This example uses Contour ingress, and therefore the following objects can be created: 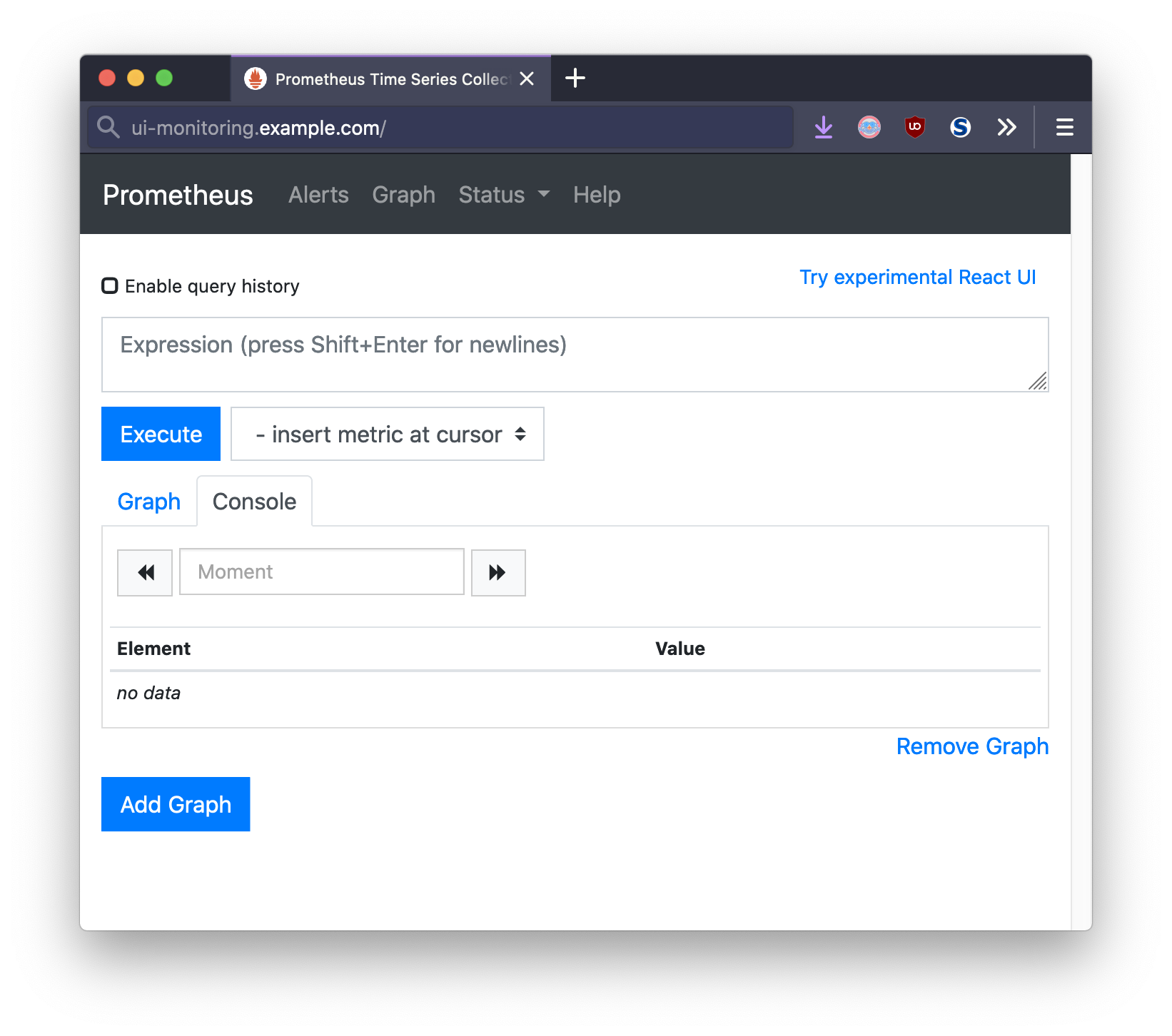 kube-prometheus also ships with a default datastore for Prometheus already set up with the parameters needed to ingest time-series data. 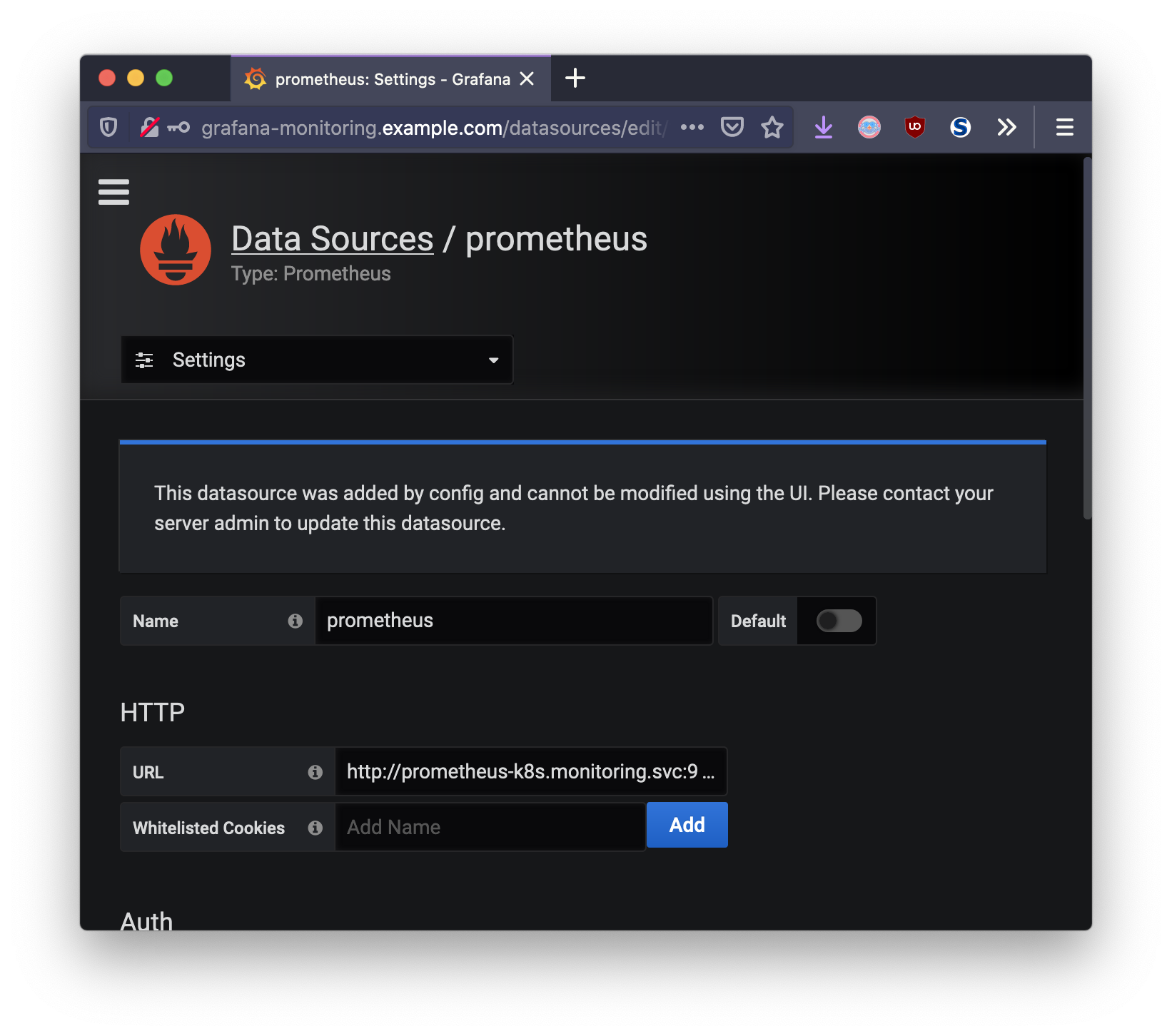 kube-prometheus also provides a set of default Grafana Dashboards that provide a number of windows into viewing this data. 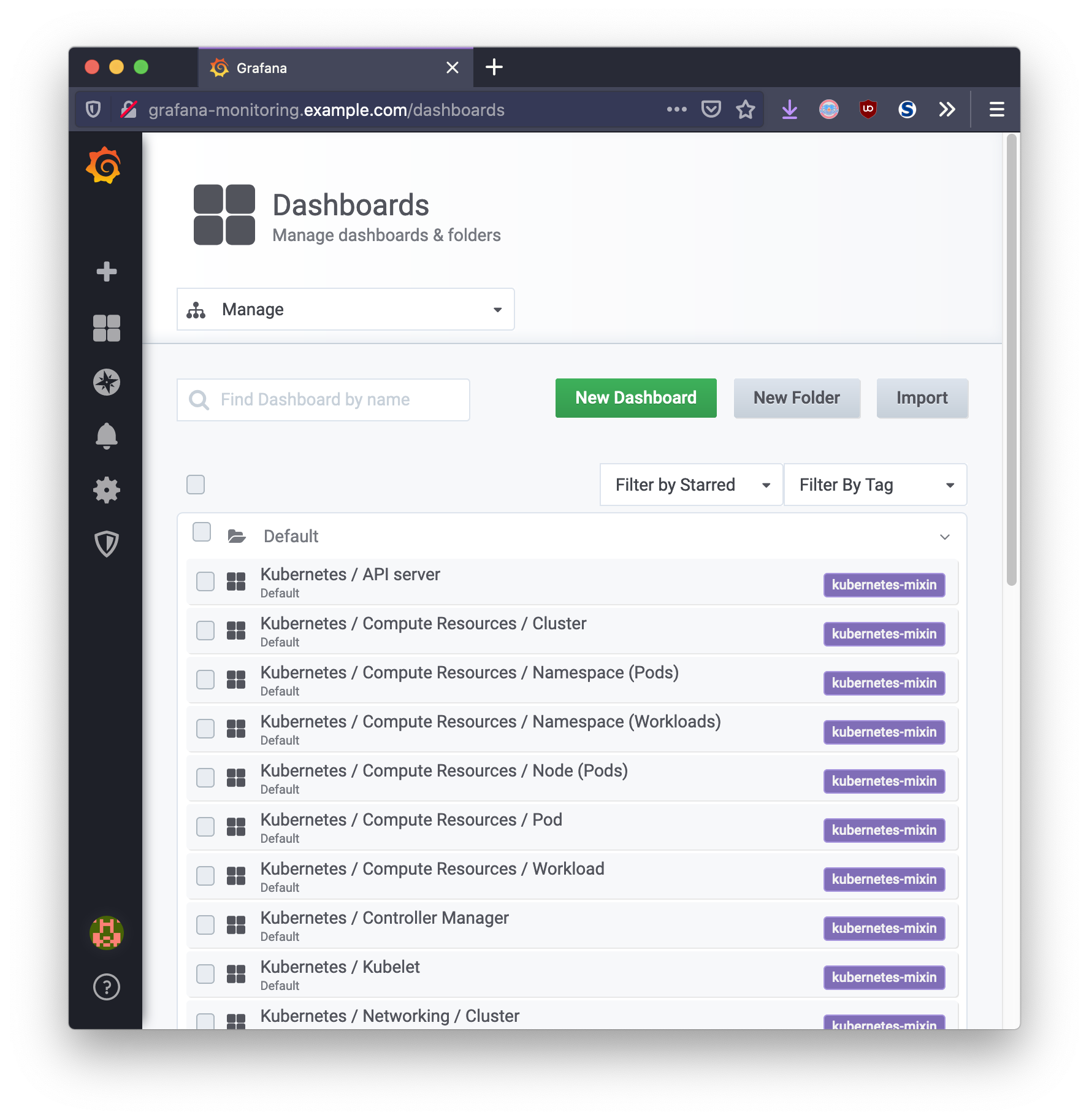 It is possible that a custom dashboard is required, for example, visualizing metrics from a custom application. This can manually be added in via the Grafana UI, or through additional configuration specified in ConfigMap resources attached to the Grafana Deployment object.

Alert Manager is provided with a default set of rules and a watchdog input. A “watchdog” refers to a Dead Man’s switch. The alert is always firing from Prometheus, and therefore should fire in Alert Manager. If it ever ceases to fire, then it is possible to detect failure in the alerting system.

This configuration is defined in a Secret from the file alertmanager-secret.yaml and may be modified after deploying kube-prometheus by modifying the secret and redeploying the Alert Manager StatefulSet.

Downstream services that receive alerts will need to be specified in the receivers section. Alert Manager provides many capabilities to alert with external systems like email, Slack, Wechat, etc. For example, in order to add WeChat functionality to the Critical receiver, you would add a wechat_config field to your receiver titled Critical.

It is important to lock down Alertmanager from unauthorized access. This can be done by removing the Ingress or securing the route using TLS certificates. As stated in the documentation: “Any user with access to the Alertmanager HTTP endpoint has access to its data. They can create and resolve alerts. They can create, modify and delete silences.”

Grafana provides the cluster administrator with a single pane of glass view into the Kubernetes cluster operations. Using dashboards, Grafana can present the monitoring data with respect to time in a way that is meaningful for measuring the health of infrastructure, workloads, and network related data. 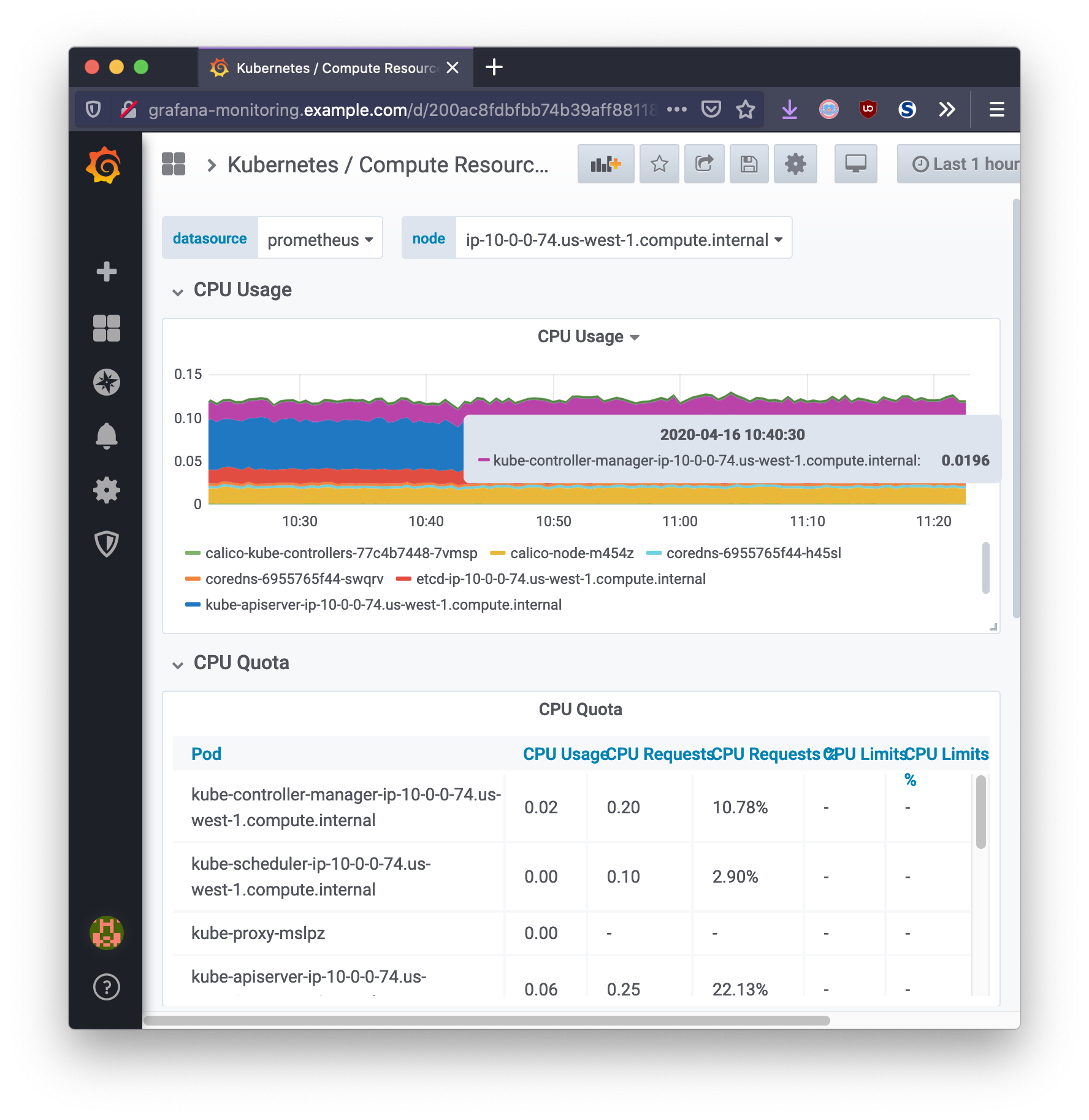 When developing an application, Prometheus will by default expect metrics to be accessible via /metrics. This can also be configured. This is specified through the ServiceMonitor resource, which monitors Service resources for your particular application and updates Prometheus with the necessary corresponding scrape configuration. This allows Prometheus to ingest these metrics like it would normally expect from a Prometheus config file.

The above resource will monitor a Service sample-app and the Prometheus operator will add the necessary scrape configuration. This will allow the metrics to be recorded by Prometheus.

Scaling Applications in Response to Monitoring

Now that this custom application is recording metrics in Prometheus, what if you wanted Kubernetes to respond to changes in a specific metric and scale the application? Kubernetes provides a Custom Metrics API which can be leveraged to automatically scale application deployments in real-time. This is highly flexible and also evolving.

The Custom Metrics API is a framework for exposing arbitrary metrics as Kubernetes API metrics. It allows them to appear via /apis/custom.metrics.k8s.io/ and be fetched internally by HorizontalPodAutoscalers. While Horizontal Pod Autoscalers ship with built-in CPU and memory resource-based scaling, it is sometimes necessary to utilize custom application-supplied metrics to scale the application. This is necessary for scaling beyond the built-in CPU and memory metrics. The example below is based on the in-depth guide provided with k8s-prometheus-adapter.

Currently scaling on memory and custom metrics are only supported by HorizontalPodAutoscaler autoscaling/v2beta2 API version.

The following is an example HorizontalPodAutoScaler that watches the http_requests metric of the sample-app Deployment:

Behind the scenes, the HPA controller detects the presence of this object, and determines the custom metrics required.

The metrics endpoint is specified by an APIService resource:

The above resource is what ties the custom API endpoint to the Kubernetes Prometheus Adapter. The adapter runs as a sort-of translation layer between Kubernetes API requests, and the Prometheus server.

Therefore, if an application sample-app is deployed and configured with a HPA resource, this application can be scaled horizontally as http_requests increases.