Getting Started with Docker Containers on Kubernetes

Once you understand what containers and Kubernetes are, the next step is to learn how the two work together. This guide provides an example of containerizing a simple application using Docker and deploying it on Kubernetes.

Docker is an open source container platform that uses OS-level virtualization to package your software in units called containers. Containers are isolated from each other and are designed to be easily portable. You can build, run and distribute applications in Docker containers to run on Linux, Windows, Macs and almost anywhere else–both on-premises and in the cloud. The Docker environment also includes a container runtime as well as build and image management.

A Docker container image is a lightweight, standalone, executable software package that includes everything needed to run an application: code, runtime, system tools, system libraries and settings. Docker provides a standard format for packaging and porting software, much like ISO containers define a standard for shipping freight. A runtime instance of a Docker image consists of three parts:

Here’s what it takes to move a Docker container to a Kubernetes cluster.

A manifest, called a Dockerfile, describes how the image and its parts are to run in a container deployed on a host. To make the relationship between the Dockerfile and the image concrete, here’s an example of a Dockerfile that creates a “Hello World” app from scratch:

When you give this Dockerfile to a local instance of Docker by using the docker build command, it creates a container image with the “Hello World” app installed in it.

Next you need to define a deployment manifest, commonly done with a YAML or JSON file, to tell Kubernetes how to run “Hello World” based on the container image:

To deploy the application on a Kubernetes cluster, you can submit a YAML file using a kubectl command similar to the following.

Once that’s done, the hello world container is deployed in a Kubernetes pod.

The container is now deployed to Kubernetes but there is no way to communicate with it, the next step is to turn the deployment into a Service by establishing communication.

In Kubernetes, a Service is an abstraction which defines a logical set of pods and a policy by which to access them. This guide demonstrates a basic method of providing services to pods.

A very interesting aspect of Kubernetes is the way Kubernetes combines the use of Labels and Services to create tremendous possibilities.

At the heart of Kubernetes is a pod. A pod contains running instances of one or more containers. When a pod is deployed in Kubernetes, apart from other specifications, the pod can be assigned labels. Ideally a pod is given a label identifying which part of the overall application the pod belongs to. For example, if the pod being deployed is for the application ”frontend” and within “frontend” the pod is running code for login, upon deployment it can be labeled [app=frontend,label=login]. Other pods deployed as part of this tier can be given the same label. 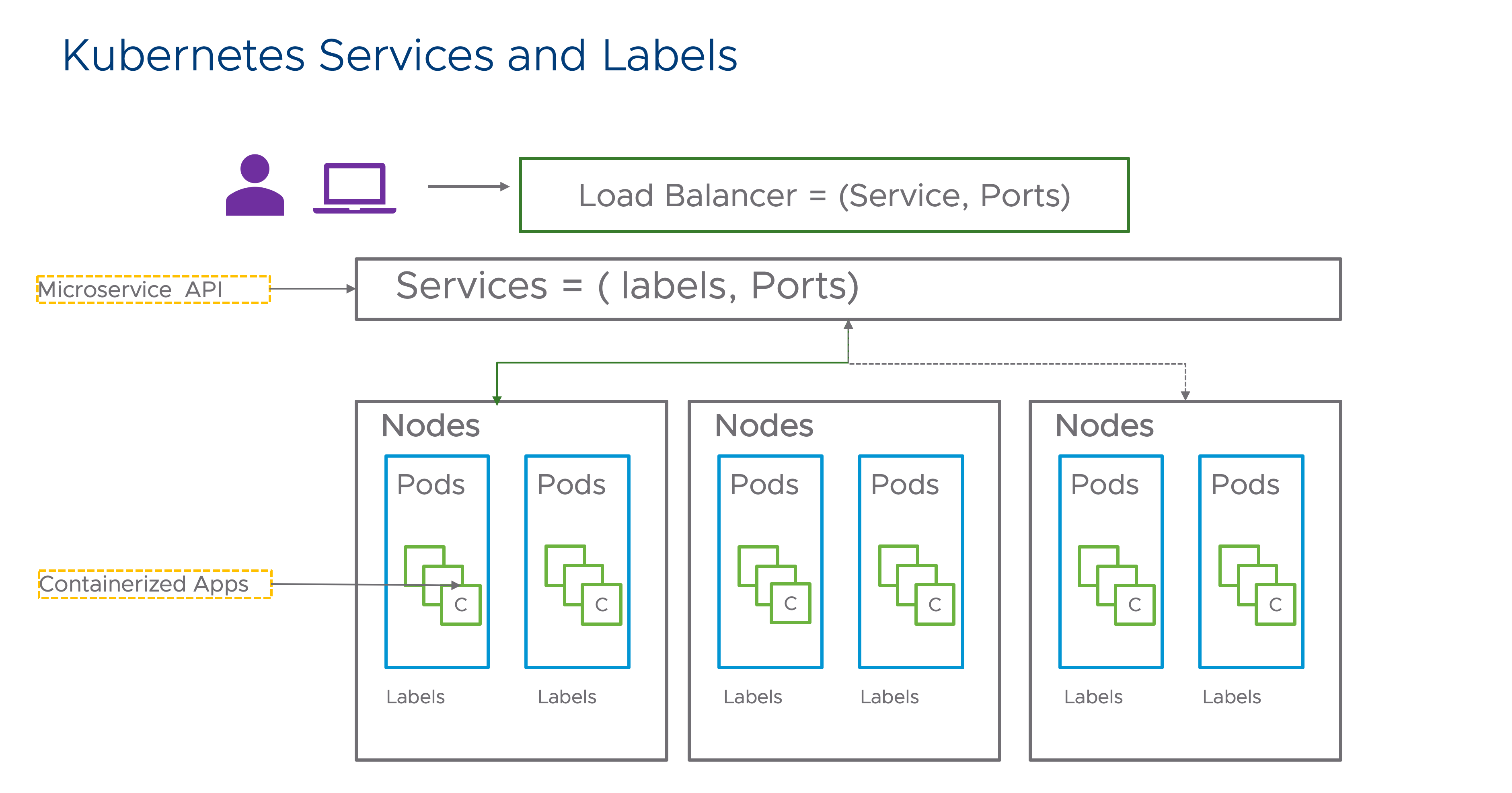 Services enable Kubernetes to route traffic to pods. Pods in Kubernetes are deployed on an overlay network. Pods across Kubernetes nodes cannot access each other nor can any external/ingress traffic access pods unless a Service type resource is defined. A service is routed to the correct app using a label. So when a service gets created with label login,the service will send traffic to pods that contain the login app based on the label match. Services are needed for both East-West communication, when two pods from different apps need to talk to each other, and for North-South communication, when external traffic ( outside of the Kubernetes cluster) needs to talk to a pod. Kubernetes has different service types to address both scenarios. Some common services are listed below:

The services resource constructs in Kubernetes may be a microservice or other HTTP services.

A corresponding service definition for the earlier “Hello World” deployment manifest is shown below. Notice line 5 onward. With the selector as "app: hello world" the service will forward traffic coming to port 80 on the cluster network to pods that match this label.

The Power of Services

Because of label matching, there is no need to understand the IP addressing of pods to load balance traffic. As a result:

This guide explained how a few simple tools can create powerful services. Microservices in application development allow for expedited development, test, deployment and upgrade and, when combined with Kubernetes, can make you fast and efficient. The video below breaks down some of the key Kubernetes concepts in five minutes:

Docker is an open source container platform that utilizes OS-level virtualization to package software in isolated containers. Applications in Docker containers can be built, ran, and distributed almost anywhere, on-premise or in the cloud.

What is a Docker container image?

A Docker container image is a lightweight, isolated, executable software package that includes all the necessary components needed to run an application, including code, runtime, system tools, system libraries, and settings.

What are Docker pods?

A Docker pod is a similar group of containers with shared namespaces and filesystem volumes.

Kubernetes can run Docker containers and ‘docker build’ images, but it is important to note that Kubernetes has depreciated support for Docker as a container runtime.

How do you run Kubernetes on Docker?

You can run Kubernetes on Docker by enabling Kubernetes in your preferences.