In this scenario, the containers within the pod shut down gracefully within the grace period. The “graceful shutdown” state for the containers represents the execution of an optional pre-stop hook and PID 1 responding to the SIGTERM signal. Once the containers exit successfully, the Kubelet deletes the pod from the API server. 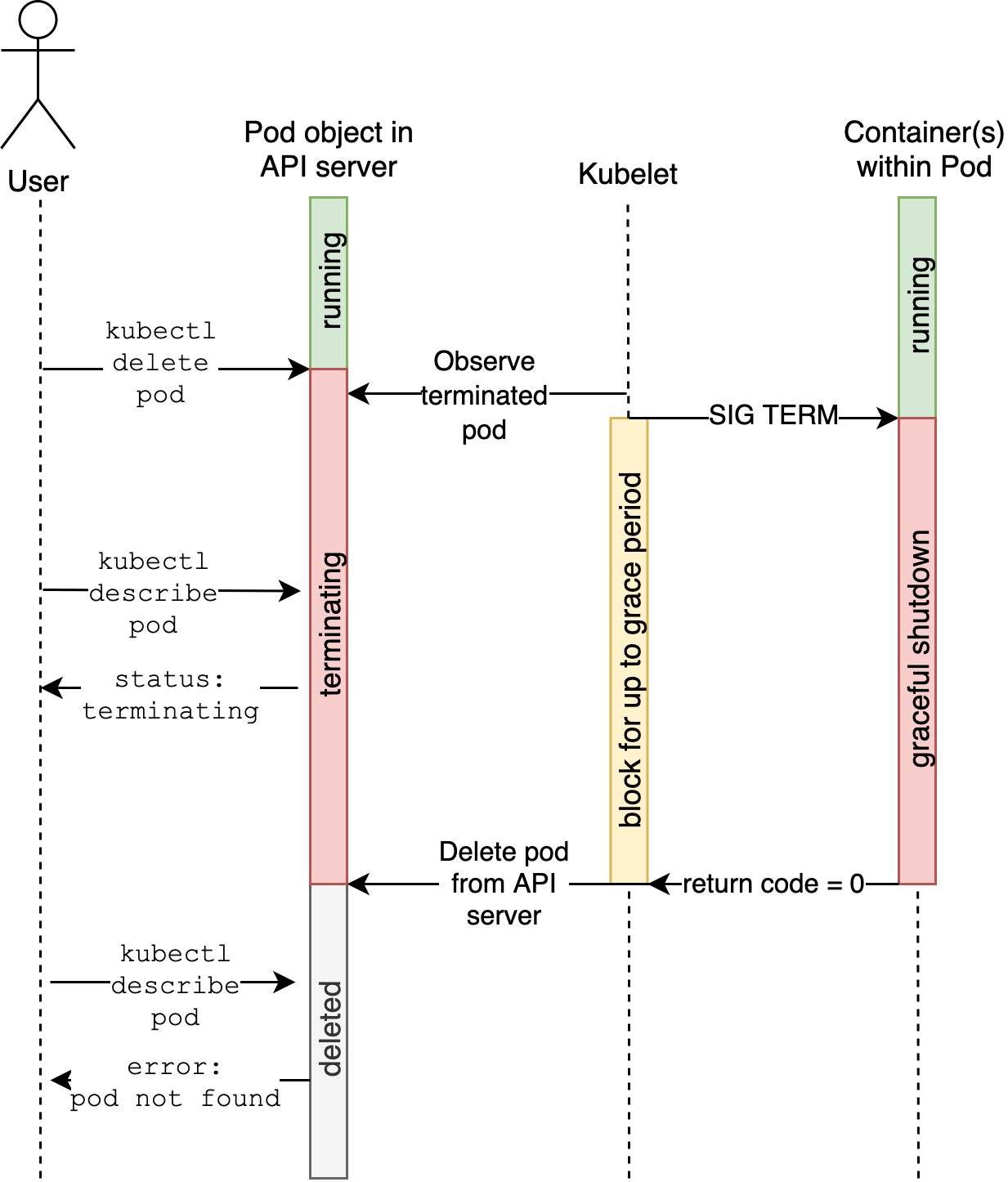 When the application fails to shutdown within the grace period, the Kubelet sends a SIGKILL signal to forcefully shutdown the processes running in the pod. Depending on the application, this can result in data loss and user-facing errors. 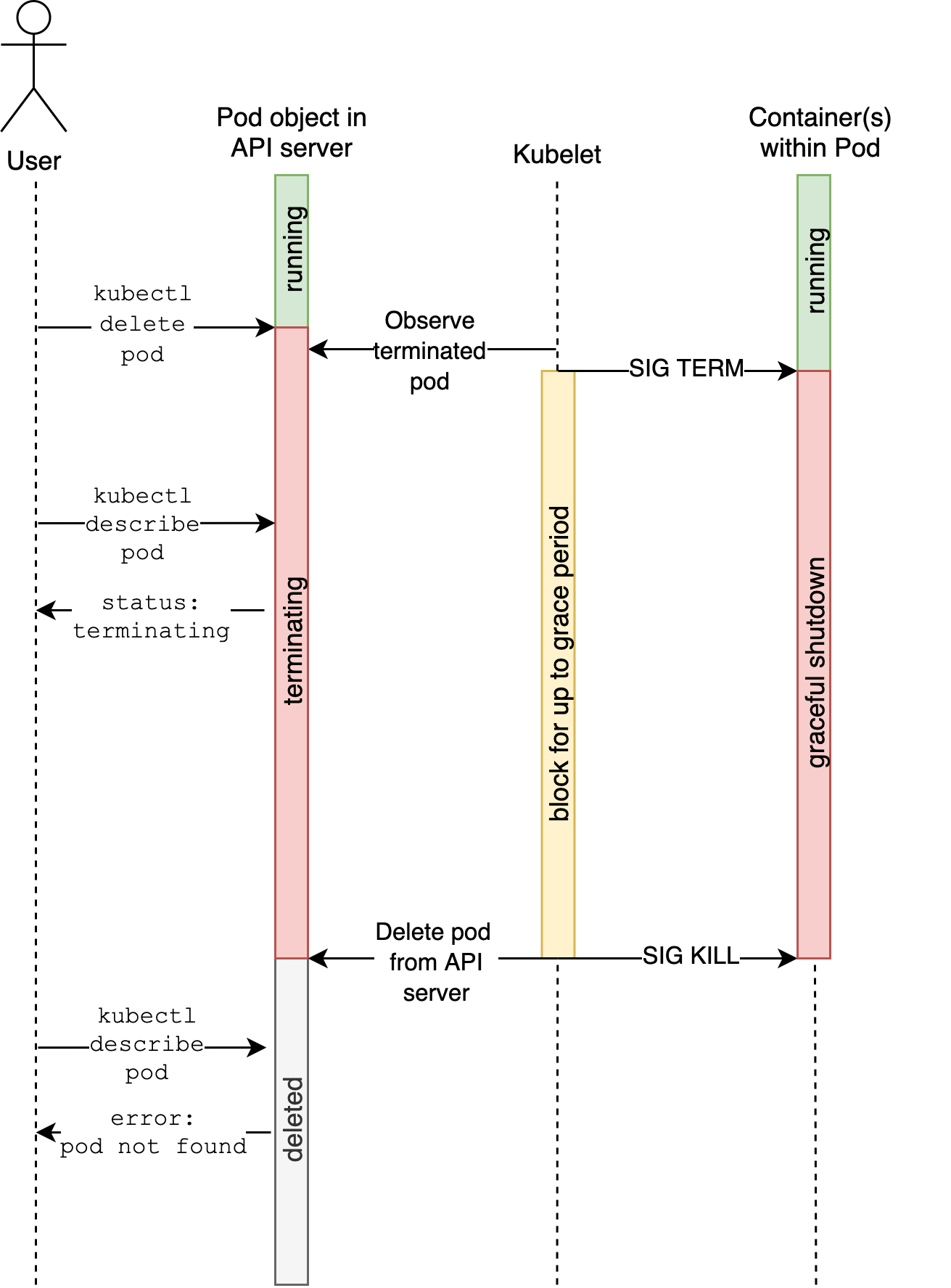 In addition to the above flow, Kubernetes exposes a mechanism to forcefully delete a pod from the cluster via the API. The forceful deletion is typically achieved using the kubectl delete pod --force --grace-period=0 command.

Forceful deletion should be avoided, as there is no guarantee that the pod will be terminated. Furthermore. the user has no visibility of this problem via the API server (using kubectl commands) and would have to log into the node to manually clean up the process. 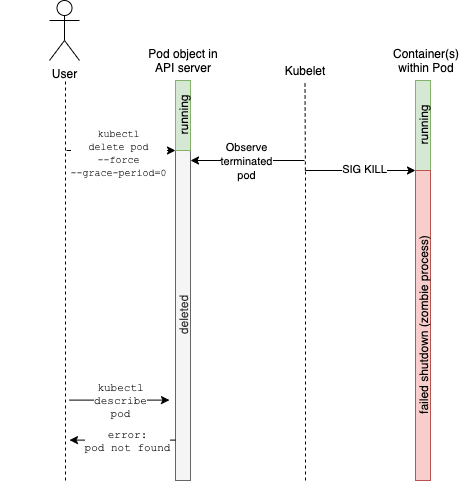 While technically possible, it is unlikely you will end up with a zombie process after forcefully deleting a pod.

The top-most process, or PID 1 process, must configure signal handlers to handle the SIGTERM signal. By doing so, the application can perform any necessary cleanup before shutting down.

The following code snippet shows how to handle the SIGTERM signal in a Go process.

How you capture and handle Linux signals depends on your language and runtime.

The graceful shutdown period is defined at the pod level using the terminationGracePeriodSeconds field. If not specified, the period defaults to 30 seconds.

The following YAML snippet shows how to set the grace period to 60 seconds.

If your application requires a separate process or script to be run, or an HTTP endpoint to be called, you can configure a pre-stop hook in your pod manifest. The Kubelet executes the pre-stop hook within the container’s namespace before sending the SIGTERM signal to the application.

The following YAML snippet shows how to configure a pre-stop hook that runs a script called pre-stop.sh.