Nowadays, web developers seem to be mainly focused on the cloud, microservices, containers, and scale. In reality, some just work with an old legacy system, struggling with it from one day to the next. Defining “legacy” is probably a post in itself, but for the sake of this post consider this one assumption:

The deployment strategy does not constitute a legacy system. It’s all about the structure of the codebase.

The structure of a system can be improved with the use of established software design patterns. This post aims to give an overview of two such patterns, Dependency Injection (DI) and Inversion of Control (IoC). An understanding of object-oriented programming (OOP) is beneficial for this post, along with some knowledge of Java, although not essential.

A lack of extensibility and testability

I have created a small demo application (waffle app) that creates waffle orders with this program flow:

The code for this demo is as follows:

The MacronutrientsProvider has a dependency on a third-party system, in this case, an API.

Even though the code looks simple and concise, it contains problems that are easily relatable to those of larger systems from the real world. There is an object, WaffleCreator that interacts with an instance of MacronutrientsProvider. One can say this is Object-Oriented Programming. Objects exchanging messages with other objects.

In the real world, cooperation between people is not that different. When you want to send a parcel, we talk to a courier. In this collaboration, we assume two things:

However, we don’t need to know how to teach a courier to be a courier. We can just rely on a delivery service. Imagine a world where we couldn’t do that! We would have to possess a very broad knowledge of courier systems and have to update it frequently as these various professions evolve.

Yet, this is sometimes the case with software.

In the case of the waffle app, WaffleCreator not only needs to know how to collaborate with the MacronutrientsProvider – by calling its fetchmethod, line 7, in the method create in the previous code snippet – but it is also fully aware of how to create/shape a MacronutrientsProvider, by newing it up, line 6.

That means that WaffleCreator is coupled to MacronutrientsProvider in two completely different ways: 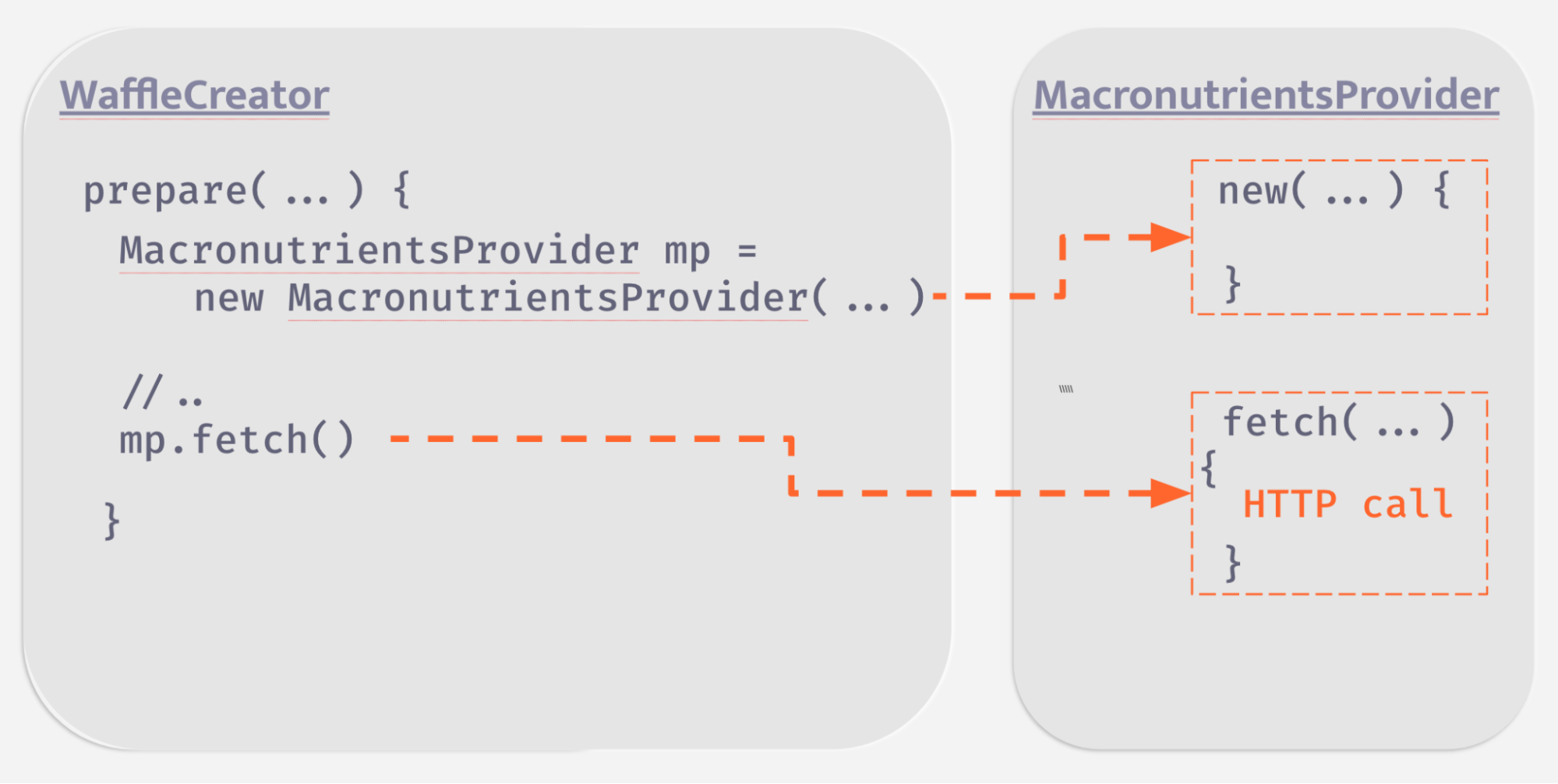 This creates at least two problems.

Testability is the first one. How can one test WaffleCreator in isolation? Since the system under test,WaffleCreator, is hardcoded with “how to create the dependency”, the problematic HTTP-based MacronutrientsProvider will make the test somewhat flaky. It will be randomly red, depending on the stability of the dependency.

By the same token, there is no easy way of swapping that dependency without affecting WaffleCreator. Let’s say you want to have a provider that sometimes communicates via HTTP, sometimes talks to a file system, and sometimes uses the internal cache. The current design lacks this kind of extensibility - the second problem.

In this instance, tight coupling might be a major contributing factor to poor maintainability.

Coupling itself is a very broad topic since there are many types of it, but there is a universal truth: the less of it, the better.

There is much truth in the popular phrase above.

What if one took advantage of it in waffle app? In this case, a central registry of dependencies might act as this additional layer. Thus, WaffleCreator would call this new registry and transfer the knowledge of “how to create the dependency” to the registry. The registry can be seen in the following example:

And that is how a dependency can be received:

This way, WaffleCreator does not need to know how to create its required dependencies. The coupling is removed to the ServiceLocator class. Now, there are two different components, each containing different pieces of knowledge.

The newly created ServiceLocator class can be populated with different types of providers. For instance, a stubbed version for testing purposes. One is fully in control of how the dependency is created and this control is outside of the WaffleCreator. This can be seen in the following example:

For the sake of testing, we can register a stubbed version:

This registry is actually a well-known and established design pattern called the “Service Locator Pattern”.

In a real application, one would have more than one type of dependency. But it is not difficult to implement a type-agnostic service locator such as the following:

There still must be a place in the codebase where the ServiceLocator class is populated with all known objects:

To summarize, before introducing the “Service Locator Pattern”, the flow of the program looked like this:

After introducing the ServiceLocator class, the flow looks like this:

Now, the creation of the MacronutrientsProvider happens before any request to create a waffle. The flow of the program has been inverted. Step one in our original flow has been swapped with step two. Also, the control of newing up the dependency has been inverted, meaning WaffleCreator no longer needs to do this.

In software engineering, this practice is called Inversion of Control (IoC). The “Service Locator Pattern” is just one implementation technique to achieve IoC.

Here are some different ways to control the flow of a program:

Dependency injection will be the focus for the rest of this article.

Take a look at the WaffleCreator constructor below and its only method - prepare.

Consider the perspective of a developer trying to understand this class. Currently, it is not obvious that there is a hidden dependency on the MacronutrientsProvider via the ServiceLocator class. One might say that one can just examine the method, but that is not always a reasonable assumption. Imagine not being an author of this class and trying to test it. From the class’ API perspective, the following snippet is a valid usage:

Yet, during tests, and not only then, but the above will also fail. This is due to the hidden dependency on MacronutrientsProvider. In other words, this solution lacks encapsulation. As a developer, one needs to know: how the class obtains certain dependencies how to prepare them and put them into the ‘ServiceLocator’.

If any dependency or feature of ‘ServiceLocator’ changes, the production code and tests need to change too.

Imagine adding a new dependency to the prepare method. First, it needs to be put into the ServiceLocator. This might imply questions like:

The global registry becomes a single point of failure that the entire system relies on. This forces the developers to be aware of how the system is structured as a whole.

The “service locator pattern” is not always the wrong choice. A hammer is an appropriate choice when you need to hit something. It is not, when all you need is to tighten a screw.

A service locator might be useful in a dynamic environment when your dependency tree is not fixed and changes at runtime. Regardless of the dependency tree being fixed or not, the problems with hidden dependencies and having a single point of failure still exist. However, as already mentioned, this is where dependency injection might be of help.

What if dependencies weren’t hidden? What if they were explicit and in the contract of our class?

An example of this is constructor injection, as shown below:

Now, if a new dependency is added, only the constructor and tests need to change. This means the code is now extendable, and adheres to the open/close principle.

There aren’t any hidden dependencies. In fact, testing also becomes easier, because we do not need to rely on a global service locator. The constructor can be called and the required dependencies provided. The additional complexity of the service locator is now gone. Like so:

Previously, the service locator was populated in the Config class and then every class was responsible for locating its dependencies.

What if this flow was inverted?

The system can have a container of dependencies that injects the required dependencies when a specific object is obtained. This is why this pattern is called dependency injection. The flow is literally inverted, hence it’s a form of inversion of control.

Typically this container is called an IoC container. The injection can be done via constructor, method or field and if you want to know why the constructor injection is preferred, read this article.

Not only is the flow of object creation inverted, but now only the IoC container needs awareness of the registered objects. Classes are no longer coupled to the service locator.

However, some issues are still unresolved.

Previously raised questions such as “how is it cleaned up?” or “can it handle duplicates?” are still valid.

If you use an IoC framework (which you don’t always have to!), all of this is taken care of. In fact, Spring Framework has an IoC container in its core. 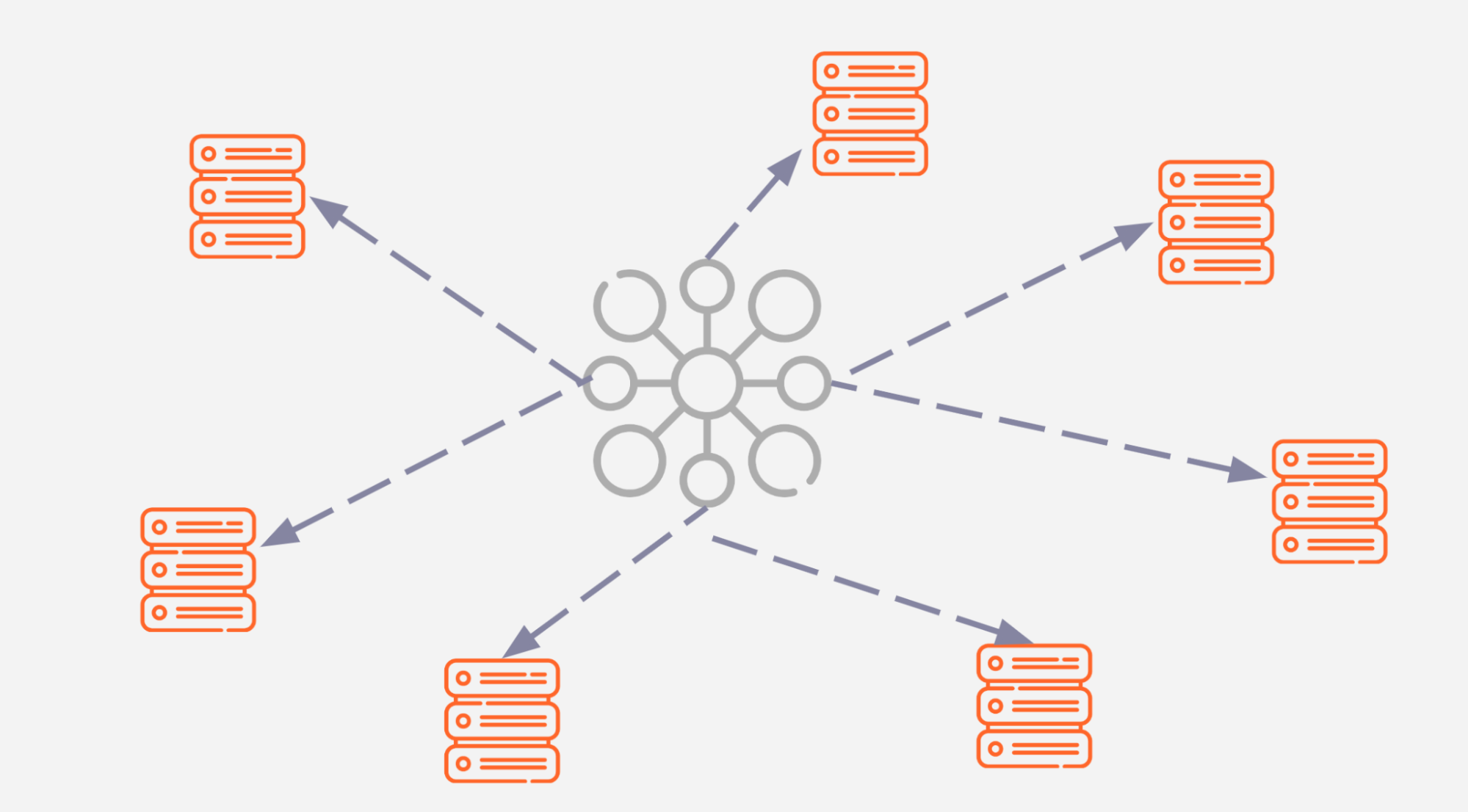 BeanFactory looks very similar to the type-agnostic container that was mentioned earlier:

Both BeanFactory and the type-agnostic service locator serve as containers for dependencies. ServiceLocator was called by the application code whereas BeanFactory calls the code. Once again, the program flow is inverted.

In fact, the BeanFactory API provides the underlying code for Spring’s IoC functionality.

With ServiceLocator, dependencies were registered in the Config class. The Config class was used for declaring what possible dependencies are available. There is an equivalent mechanism in the Spring’s IoC container and is called “bean registration”.

There are three options to register a bean in Spring:

As the Spring documentation states, each approach has its pros and cons.

Sometimes it is preferable to have the configuration close to the source. Some would argue that annotated classes are no longer POJOs and, furthermore, there is no single place with a centralized configuration, making the code harder to maintain.

It is worth mentioning that the styles can be mixed together.

This article has covered dependency injection in the context of Spring and solved a common problem; that an object which wants to use a given dependency should not construct those services. It should receive its dependencies from an external place, thus improving the testability and extensibility of your software.

I hope you enjoyed this overview of dependency inversion. If you have any thoughts or ideas please say hello on any of the channels below: