A Container Is a Linux Namespace and Networking Basics 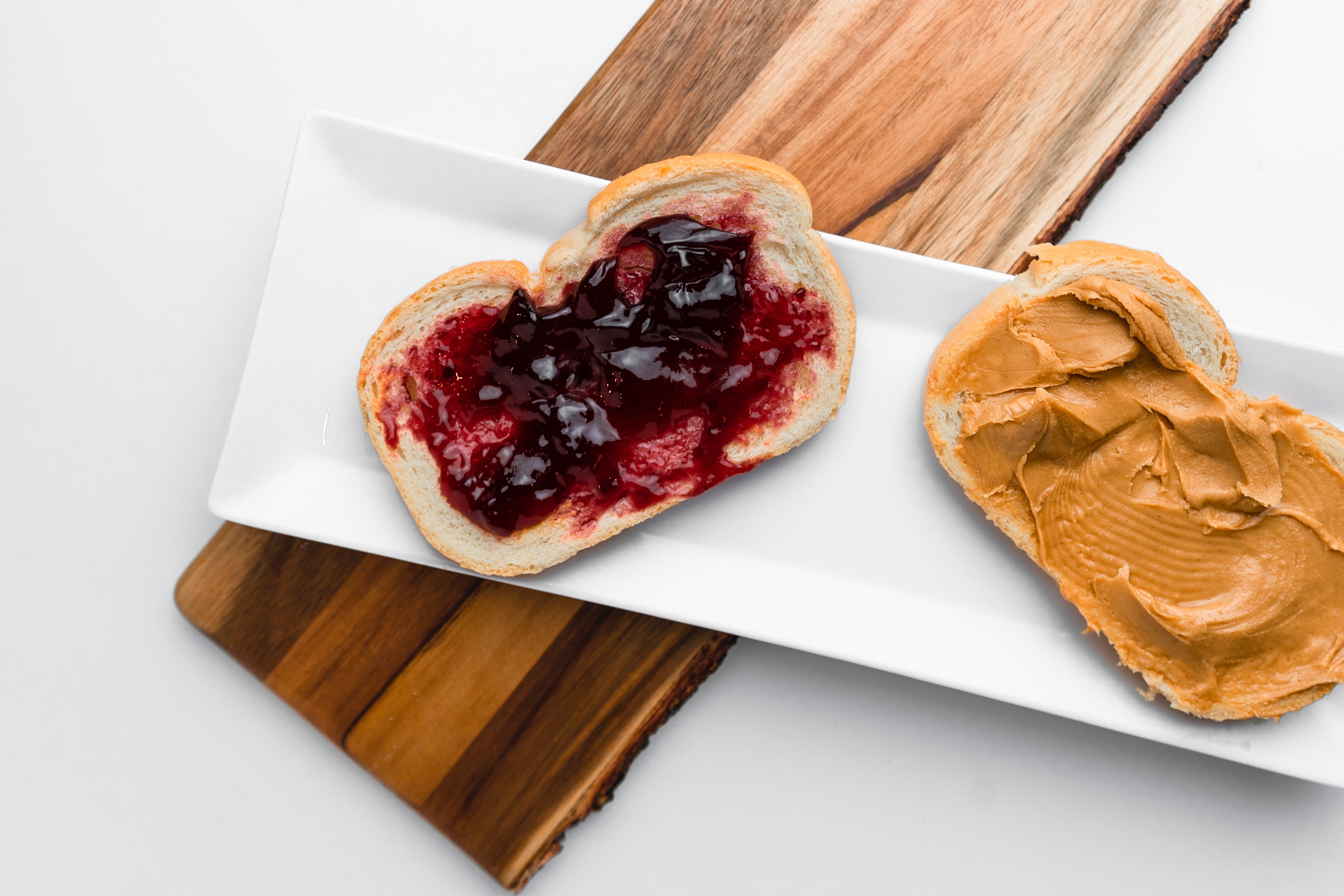 Understanding the way containers communicate will make your life easier in many ways. Technologies like Kubernetes and Docker abstract away details that make containers special, but can also abstract away intuition and understanding. Without that knowledge, challenges arise—educated problem-solving adds confidence to decision-making!

In this post, we will demystify containers and cover some networking basics by explaining how to create two rudimentary containers and connecting them with a virtual network so they can talk to each other. The host machine, which is the machine where the network lives, views this network as if it were completely external. So, we will connect the network to the host. We’ve also included a bonus section about connecting the network to the internet so your containers can reach Google. You do not need a Linux machine to run through the exercises.

Containers and Networks: What Are They?

A container can be considered synonymous with a Linux network namespace. Keep this in mind. Essentially, a container is a namespace.

Each container runtime uses a namespace differently. For example, containers in Docker get their own namespace, while in CoreOS’ rkt, groups of containers share namespaces, each of which is called a pod.

Containers are based on Linux networking, and so insights learned in either can be applied to both. You can apply these concepts to anything with Linux, including containers, VMs, computers, servers, the cloud, IoT, Raspberry Pi, and supercomputers.

When you think of networking, you might think of applications communicating over HTTP, but actually a network refers more generally to a group of objects that communicate with each other by way of their unique addresses. The point is that networking refers to things communicating with things, and not necessarily an application or a container — it could be any device.

One way to connect two containers is to create a virtual network. One way to do this is by creating two namespaces and two virtual ethernet cables. Each cable should be attached to a namespace on one side, and on the opposite end be united by a bridge, to complete the network.

Now that we have defined containers are Linux namespaces, let’s see how the two go together like pb and jelly.

View Interfaces on Your Host

If you do not have access to a Linux operating system or don’t want to use what is available, you can install Multipass to easily spin up a virtual machine (VM). It’s a decent solution for what we are doing. A lot of the commands below have sudo prepending them due to Multipass.

Now spin up a VM with the name ‘linux-vm’ with Ubuntu using the following command:

To enter into a shell in your VM, use the following:

View Interfaces on Your Host

To see the interfaces on your host, enter:

This should print out the devices that are available; any networking device that has a driver loaded can be classified as an available device. In the output, you might see devices like lo and enp0s2. The ip link command will also output two lines for each device, the link status, and the characteristics.

Once they are added you can view them with ip netns list.

You now have a very simple container that can’t do much at the moment. To get more functionality you can connect the namespaces using a veth device.

Create a Virtual Ethernet Cable for Each Namespace

Veth devices are always created in interconnected pairs where packets transmitted on one device in the pair are immediately received on another device. When either device is down, the link state of the pair is down as well.

In our example, we are creating two veth pairs. The jelly namespace will connect to the veth-jelly end of the cable, and the other cable end should attach to a bridge that will create the network for our namespaces. We create the same cable and connect it to the bridge on the pb side. 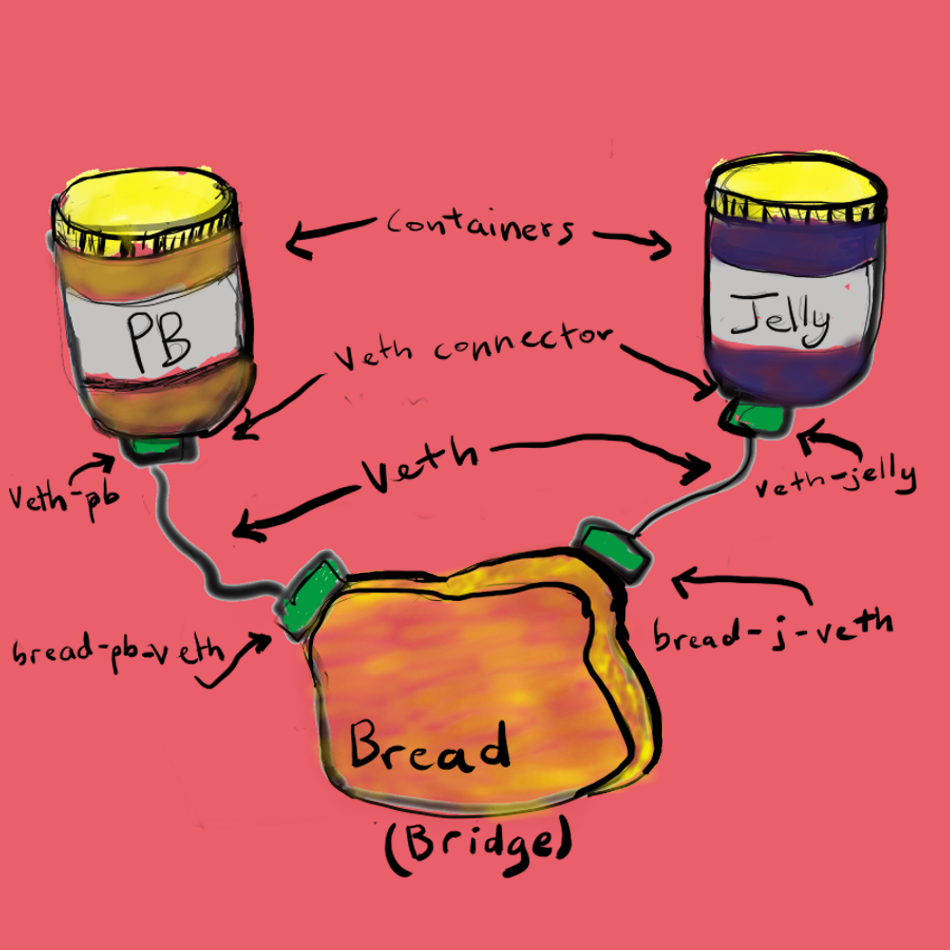 To create both veth pairs, use the command:

Now when you look at the devices you will see your veth pairs on the host network.

Attach the Veth Cables to Their Respective Namespaces

If you check ip link list you will no longer find veth-pb and veth-jelly since they aren’t in the host namespace.

To see the ends of the cable you created, run the ip link command within the namespaces:

Assign IP Addresses to Each Namespace

Since we keep using ip commands, you might be wondering what the IPv4 addresses are. Let’s quickly retrace our steps to make sense of it all.

You began by creating two namespaces, then a virtual ethernet cable. Then you connected the devices to the cable.

Now, in order to create an IP address for the jelly namespace, use the ip address add command for the device jelly:

Similarly, assign an address to pb as well:

Make sure they have the IP addresses that you set.

Bridge the Gap Between Namespaces

You now have both the IPs and interfaces set, but you can’t establish communication with them. That’s because there’s no interface in the default namespace that can send the traffic to those namespaces, and we didn’t configure addresses to the other side of the veth pairs or configure a bridge device. But with the creation of the bridge device, we’ll be able to provide the necessary routing to properly form the network.

So now, create your bridge. I called mine brd1, for the bread needed for our pb and jelly sandwich.

To check if the device was created, execute ip link.

With your bridge device set, it’s time to connect the bridge side of the veth cable to the bridge.

You can add the bread veth interfaces to the bridge by setting the bridge device as their master.

You have now united pb and jelly, the two “containers” you created.

Bonus: Connect Your Containers to the Host and the Internet

If you try to ping 192.168.0.56 from the host it won’t work because the namespace doesn’t have visibility to the global scope. As far as the namespaces are concerned, they are isolated on their own machine.

In order to access the namespaces directly from the host namespace, set the address of the bridge device bread

Now you can ping the namespaces directly from the host!

If you try to reach the internet from one of the namespaces, however, it will not work.

First, add a default gateway to the bridge:

Now check how the routing table looks inside your namespaces:

You can now connect to the internet, but can’t send or receive packets. To receive packets, configure Network Address Translation (NAT) with Masquerade. Masquerading allows machines to invisibly access the Internet via the Masquerade gateway, whereas a NAT can hide private addresses from the internet.

Lets add a new iptables rule in the POSTROUTING chain of the NAT table to receive packets.

Here is a breakdown of the above flag:

And now try to reach the internet from one of your namespaces:

You should now have complete connectivity. The host can direct traffic to a namespace, and therefore microservices within, and vice-versa. And applications in the namespace can now communicate with each other and access the internet.

You were able to create two containers and a virtual network from scratch! You have gained a more intuitive and intimate understanding of containers and Linux networking concepts, tools, and commands. Creating a container was as easy as one command ip netns add pb to create your namespace.

Keep a lookout on the VMware Tanzu Developer website for upcoming articles. A great resource to learn more about container networking is the Container Network Interface, where you can learn how the community is standardizing container networking standards. And if you are inspired you can contribute or create your own plugin!

If you just want to run a script and check the status after or get stuck check out this script.

Using network namespaces and a virtual switch to isolate servers