We set up our DNS (Domain Name System) records as shown in the table below (we’re using the same domain, cf.nono.io, for both system and app domains, and this is probably not a good idea):

Our DNS server uses a BIND-format (Berkeley Internet Name Domain) [1] file, and here are the raw entries (tweaked for readability):

Here are the relevant lines from our script:

The environment variable $DEPLOYMENTS_DIR refers to the directory which contains our customizations (~/workspace/deployments).

Let’s talk about our customizations; We customize as follows:

As long as BOSH DNS is colocated on all deployed VMs (which is the default BOSH Runtime Config), you shouldn’t need to make changes.

Deploying the VMs requires one command, bosh deploy, but with many options. Here are the relevant lines from our deploy shell script.

4. Prepare the Manifest Operations File to Enable IPv6 on HAProxy

The 23-line manifest operations file is too long to inline in this blog post, but let’s review key points:

A reasonable question is, “do browsers have trouble consistently navigating to HAProxy’s IPv6 address given that *.cf.nono.io resolve to both IPv4 and IPv6 addresses?”

For best results, use Ubuntu Xenial stemcells 621.51 or greater; IPv6 router advertisement are enabled by default.

The author is of the opinion is that load balancers are often an unnecessary expense, and many users are better off with a carefully-monitored single webserver rather than a fleet of webservers fronted by a load balancer. To quote Andrew Carnegie:

put all your eggs in one basket, and then watch that basket

BIND is an old-school DNS server. Nowadays most users are better off using DNS-as-a-service (e.g. Amazon’s Route 53, Google Cloud DNS), but for the hardcore, deploying your own DNS servers is a wonderfully addictive option. The author, for example, has been running his own DNS servers since 1996, and currently maintains 4 DNS servers on 4 different IaaSes (Azure, AWS, Google, Hetzner) on 3 different continents (America, Asia, Europe).

The author is an unapologetic DNS fanboy, and had Paul Mockapetris, the author of the original DNS RFC, autograph his laptop with a permanent marker.

My co-worker Belinda Liu turned to me and said, “I don’t like these tests at all; they’re hard to follow, a...

Scaling the Loggregator API So you’ve used this article to correctly scale Dopplers in your Loggregator sys... 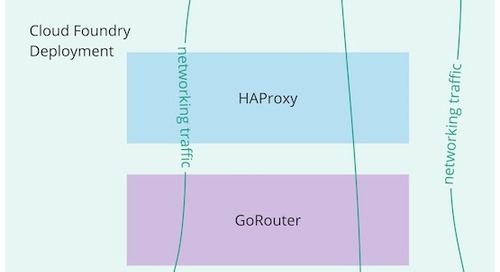