Scott Yara, Senior Vice President of Products at Pivotal, talks about how learnings on application efficiency can help databases everywhere.

Speaking at the Greenplum Summit at PostgresConf, Scott Yara couldn’t help be reflective. It’s been almost 30 years since the start of the Postgres project and community — and what a ride it’s been. Several years after Postgres, Yara and Luke Lonergan brought their two companies together to form Greenplum, an open source and massively parallel database system built for analytics.

When talking about the community and their role in shaping the company, Yara said: “Postgres delivered so many useful features and a broader community of users that were interested in finding new ways to use Postgres. So I don’t think we could have been successful without it.”

Now, Greenplum is part of Pivotal, and the team is operating with greater efficiency and productivity than they ever have before. When asked about what’s exciting about Pivotal Greenplum, Yara said “we’re starting to see… the business demands that these analytical systems we’ve been sort of building over the last 10 years, they need to be more closely connected to the applications that eventually consume them.”

This is where big organizations can really benefit. “At the end of the day, if we’ve moved the applications onto [Pivotal] Cloud Foundry, but we still haven’t touched the database system, and those database systems are still managed the same way that they’ve been over the last 20 years, then we really haven’t solved the whole problem.” But Yara goes on to explain the solution, as he sees it, “I think that there’s this big push in the database community as a whole to try and make database systems so that they can be what we’re calling container native — that they can be provisioned and scaled and managed with the same efficacy that we have enjoyed on the application side over the last 5 years.”

But that’s not all Yara had to say about database efficiency; watch his whole conversation with Jeff Kelly below:

Scott Yara Explains Why Data Tells The Story was originally published in Built to Adapt on Medium, where people are continuing the conversation by highlighting and responding to this story. 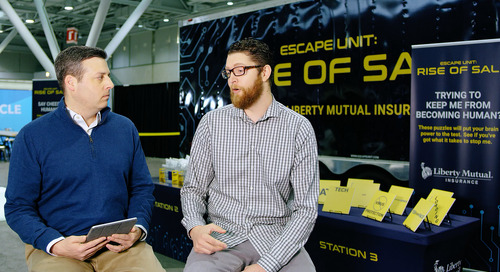