Yes, it’s true that fewer software engineers exist compared to the number of open positions. Gartner predicts there will be 1.4 million computer specialist job openings by 2020, while the U.S. Department of Labor estimates universities will not produce enough qualified graduates to fill even about 30 percent of these jobs. But the talent gap isn’t just a simple shortage of skilled and able bodies, rather it’s a multi-faceted problem with several myths that in turn prevent businesses from finding a holistic solution.

From cloud-native computing to server automation, the development of new tools is accelerating and at the same time, accelerating businesses’ software development. In a presentation, Shafer compared the cloud-native paradigm’s effect on software development to how the Gatling gun revolutionized warfare. The Gatling Gun, while terrifying in its capability to rapidly inflict destruction, succeeded at greatly reducing the number of casualties in battle. History is littered with examples like this where a technological advancement eliminated a tradeoff to gain a competitive advantage. In this case, the payoff reduced the number of soldiers necessary to successfully engage an opponent in warfare.

“In Atlanta there is a tremendous amount of wealth that hasn’t typically been invested in the software space, but you’re seeing that’s changing now,” said Paul Vandenberg, the director of the newly opened Pivotal office in Atlanta. “One of the reasons why Silicon Valley has remained successful in cultivating talent is this networking effect: you go there and you’re able to find the capital and the talent, and the ecosystem continues to just grow and grow.” Vandenberg pointed to The Home Depot as an example of a company invigorating the local Atlanta tech scene, as it expands its digital offerings and recruits local talent.

If the development cycle can be summed up in actions of “build, measure, learn” then perhaps we can define the cycle of hiring engineering talent as “teach, support, grow." 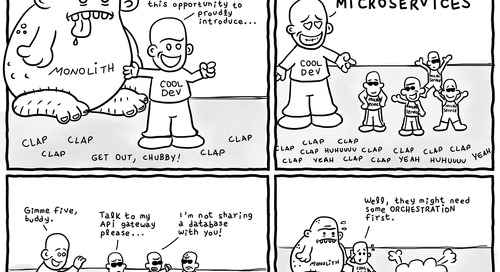 Comic by {turnoff.us}The Monolith Retirement was originally published in Built to Adapt on Medium, where pe... 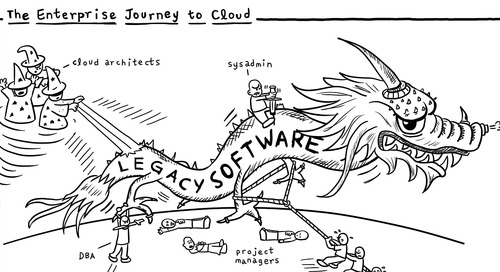 Enterprise Journey to the Cloud

Comic by {turnoff.us}Enterprise Journey to the Cloud was originally published in Built to Adapt on Medium, ...