Why the Xbox One will Take Over the Living Room

The day we’ve been waiting for has finally arrived: today, November 22, marks the public debut of Microsoft’s new console, the Xbox One. It’s much more than just another gaming system: similar to how all sound signals must travel through a receiver before being broadcast through a sound system, Xbox One is becoming the layer that video travels through before being broadcast on the television screen. And why would you want to watch TV through another device?

The Xbox One enhances the experience; with Modern UI’s snap feature (which runs apps simultaneously with the main screen in a dialog box on the side), Xbox One users can watch TV or run other apps while playing a game and remain connected. Its HDMI input allows users to watch TV through it (or play the PS4 apparently). What exactly does this mean, and why do we believe that the Xbox One is one of the most potent devices in media today?

The Xbox One’s abilities to run and display apps on the big screen in the living room earns it a prominent role in the the hub of the home. While Microsoft is (understandably) attempting to partner up with many large media companies for content (here’s a full list, which ranges by region), there’s a different strategy that they can use to really set themselves apart from their competitors: embrace locality.

Many large cable providers, as mentioned in an earlier post, are struggling to provide additional relevant content to local audiences without spreading the costs across the wider general audience. Microsoft has the opportunity to capitalize on this with the Xbox One: what if they approached local news companies to start creating apps to capture local audiences? Microsoft isn’t limited by the same infrastructure constraints and economic factors as cable companies; they can provide the specialized content that would compel users to choose it over, or in addition to, the PS4 simply because of its relevant content.

Similarly, it could also target regional newspapers-of-record: these media companies likely have the resources to create short video content. Imagine if The New York Times had a 12-15 minute news brief every morning and night. When users wake up, they can watch a concise news clip at their convenience, instead of the scheduled hour-long CNN news show. Even if they weren’t interested in gaming, the growing ranks of cordcutters could get plugged in to the local news again with their Xbox One.

Essentially, this focus on localization would position the Xbox One to replace the archaic set top boxes of today by offering consumers more of what cable is struggling to share. With the Xbox Live infrastructure, they are in a good position to charge a low flat rate, with additional channels available to purchase á la carte.

Every Xbox One comes with a Kinect device. For those unfamiliar, Kinect is a camera that can track movement and facial expressions. Imagine the possibilities it holds for targeted advertising based on consumer behavior and demographics. (They’re kind of scary.)

Kinect already has facial recognition capabilities built-in, allowing it to determine user characteristics: child, adult, male, female. By capturing all this data and being the mediator for content, the next logical step is for Microsoft to offer extremely targeted advertising, should they choose to leverage it. As an example, when it detects a mother and son watching TV, it can display a Big Wheels advertisement (no doubt her son will attempt to persuade by nagging the heck out of her). When she’s with her husband, it can show them a getaway cruise sponsored by Carnival.

That’s just the beginning. Apparently, although it can detect facial expressions and react accordingly, the data is not sent to Microsoft. They claim that the information is destroyed after each session. However, the capabilities are there: through your body language, Kinect can detect your emotions and potentially serve up content and advertisements that will cheer you up, calm you down, or get you excited. With its dominance in the living room, it can become the major player in advertising.

Enhancing the Ecosystem and the Xbox One’s Competitive Advantage

As Apple has proven with iOS, a healthy ecosystem can be a powerful competitive advantage. Xbox One is poised to become the center of the living room’s ecosystem; the SmartGlass feature allows Windows Phone and Windows 8 units to serve as companion devices to the Xbox One. Similarly, the Xbox One has launched with apps for Microsoft services such as Skype and Skydrive, as well as one for Google’s YouTube.

Now imagine if Microsoft didn’t restrict itself to Windows devices. Imagine if iOS and Android devices worked completely seamlessly with the Xbox One. Similar to how Apple gave “a glass of ice water to somebody in hell” by bringing iTunes to Windows, and how Google is making Chromecast compatible with all devices, Microsoft could completely push AppleTV and Roku out of the living room if they open up their ecosystem to non-Windows devices. Other software companies would feel more compelled to develop apps for the Xbox One, since it will become another way to connect with their current users.

Similar to how Google naturally expands into multiple platforms as developers build Chromecast functionality with the dedicated cast button, apps on all sorts of devices could have the Xbox One button. But let’s not kid ourselves: the harsh truth is that Windows Phone’s market share is lagging far behind Android and iOS (we’re talking 3% vs. over 40%). What if Microsoft reaches beyond Windows and uses this as a way to spread Xbox One?

The Xbox One isn’t only competing with the PS4. Things are getting scary for Apple TV and Roku. Similarly, it could also edge out cable companies and open the door for many more engaging types of advertising campaigns. While the possibilities are endless and the Xbox One certainly has a strong foundation, it’s still a new platform and it’s going to need an ecosystem of amazing apps to grow to its fullest potential – and take over all our living rooms in the process.

Connect with Sheetal and Paula on LinkedIn. 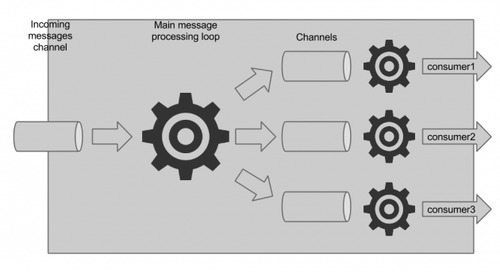 After Jared’s excellent introduction to Go concurrency and his look at patterns of Go channel usage I would...

A Recap of Hacking Health 2013

On November 8-10, over 400 participants (including approximately 75 physicians) gathered together to create...