We investigated and discovered our public NTP server was heavily loaded. Over a typical 45-minute period, our instance provided time service to 248,777 unique clients (possibly more, given that a firewall may “mask” several clients), with an aggregate outbound data of 247,581,892 bytes (247 MB). Over the course of a month this traffic ballooned to 332GB outbound traffic, which cost ~$40.

This blog post discusses the techniques we used to investigate the problem. A future blog post (Part 2) will discuss how we fixed the problem.

What had happened? Our account has only one instance, and it’s a t1.micro instance, Amazon’s smallest, least expensive instance. Had we deployed other instances and forgotten to shut them down? Had someone broken into our AWS account and used it to mine bitcoins? Had our instance been used in an NTP amplification attack? We scrutinized our Amazon AWS bill:

This month’s Amazon AWS Bill. The bandwidth charges are surprisingly large given that the bulk of the traffic is DNS and NTP

We determined the following:

We needed more data. We turned to Amazon’s Usage Reports.

We ran a report requesting the following information:

We downloaded the report and imported it into a spreadsheet (Apple’s Numbers). We noticed that the traffic had a thousand-fold increase on March 30, 2014: it climbed from 4.2MB outbound to 8.9GB outbound.

We graphed the spreadsheet to get a closer look at the data: 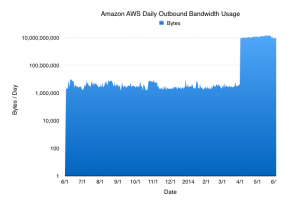 We noticed the following:

We use git to track changes on our instance’s /etc/ directory; we use git log to see what changes happened on 3/30:

That was also the day when we registered our server with the NTP Pool, a volunteer effort where users can make their NTP servers available to the public for time services. The project has been so successful that it’s the default “time server” for most of the major Linux distributions.

It takes about a day for the NTP Pool to satisfy itself that your newly-added server is functional and to make it available to the public—that is likely why we didn’t see any traffic until a day later, 3/30.

Could NTP be the culprit? Had our good friend NTP stabbed us in the back? It didn’t seem possible. Furthermore, the documentation on the www.pool.ntp.org website states that typical traffic is “…roughly equivalent to 10-15Kbit/sec (sic) [2] with spikes of 50-120Kbit/sec”.

We need to examine packets. We decide to do a packet trace on our instance for a 45-minute period:

We don’t concern ourselves with the 8665 packets that were dropped by the kernel—they represent less than 0.15% of the overall traffic, and are thus inconsequential.

We copy the file (/tmp/aws.pcap) to our local workstation (doing traffic analysis on a t1.micro instance is painfully slow).

Is our packet trace representative? Yes.

We have a dilemma: tcpdump’s units of measurement are packets, not bytes. We will address this in two steps:

Once we have the total number of bytes, we can determine the throughput.

What percentage of our outbound traffic is NTP? 99.6%

We want to confirm that NTP is the bulk of our traffic. We want to make sure that NTP is the bad guy before we point fingers. Once again, we use tcpdump in conjunction with pcap_len to determine how many bytes of our outbound traffic is NTP:

NTP is the bad guy.

Clue #5: Compare against a control

We want to see if we have an excessive number of NTP clients vis-a-vis other NTP pool members. Fortunately, we have another machine (our home network’s FreeBSD firewall, also an NTP server and connected to the Comcast network) that’s also in the NTP pool. We’ll pull statistics from there:

We are only concerned with outbound NTP traffic. tcpdump and pcap_len to the rescue:

We determine the number of unique NTP clients that each host (AWS and home) have:

Our AWS server is handling 7.1 times the number of unique NTP clients that our home server is handling. This is troubling. It means that certain AWS NTP clients are using up more bandwidth than they should. Furthermore, we need to remember that we ran tcpdump longer (2693.13 seconds) on our AWS server than we did (2209.59 seconds) on our home server, giving AWS more time to collect unique clients. In other words, the ratio is probably worse (if we extrapolate based on number of seconds, the AWS server is spending twice the bandwidth for each client than the home server).

We suspect that broken/poorly configured clients may account for much of the traffic. The grand prize belongs to an IP address located in Puerto Rico (162.220.96.14) managed to query our AWS server 18,287 times over the course of 2693 seconds, which works out to 6.7 queries / second.

Let’s take a brief moment to discuss how we generated these numbers: we lashed together a series of pipes to list each unique IP address and the number of packets our instance sent to that address, converted the output into CSV (comma-separated values), and then imported the data into a spreadsheet for visual examination.

And let’s discuss the graph below. It shows the correlation between the number of unique clients, and the number of queries each one makes. We want to see, for example, if we block any client that makes more than 289 queries in a 45-minute period, how much money would we save? (In this example, we would save $48 over the course of the year) 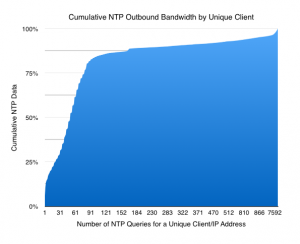 This chart is tricky: let’s use an example. The 25% on the Y-axis crosses 23 on the X-axis, which means, “25% of the NTP traffic is to machines which have made 23 or fewer queries”

Now we have some tools to make decisions. As with most engineering decisions, economics has a powerful say:

But we are uncomfortable with this heavy-handed approach of blocking IPs based on nothing more than the number of queries. Our assumption that a large number of queries is indicative of a faulty NTP client is misguided: For example, a corporate firewall would appear as a faulty client, but merely because it’s passing along hundreds of queries from many internal workstations.

1 The yearly cost is slightly less than $500, closer to $480; however, we decided to exercise poetic license for a catchy headline. Yes, in the finest tabloid tradition, we sacrificed accuracy on the altar of publicity.

2 The SI prefix “k” (kilo) should be lowercase. Just sayin’.

3 Math is as follows:

4 pcap_len is a program of dubious provenance that was uploaded to a tcpdump mailing list in 2004. Thanks Alex Medvedev wherever you are.

But we are not country bumpkins who trust anyone who happens to post code to a mailing list. We want to confirm that the pcap_len program works correctly. We need to know two things:

The size of the NTP packet is straightforward, 90 bytes:

And the pcap file format overhead per packet? 16 bytes.

5 Math is as follows:

6 Math is as follows: 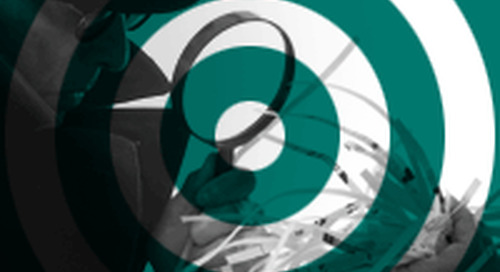 In my conversations with CISOs, one of their biggest fears is insider threat attack. Employees must access ... 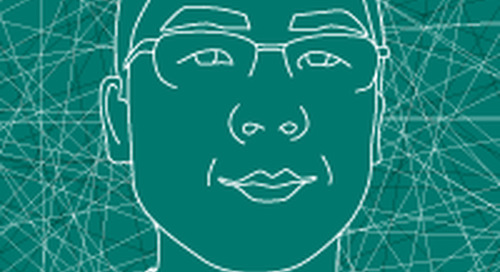