When the designer bubble goes pop

“Hey, the economy is going to turn around in the West,” I yelped across the living room to my roommate. She poked he head around the side of the door,

“What? When?” Flipping through my favorite issue of The Economist, one that foreshadows the following year, I tell her things are turning around for the Americas, Europe and Japan. I flip a few more pages and see the word “tech” in a headline with an image of an occupy protester. I lowered my brow and shoulders as I read the coming tech-lash.

“We live in a bubble,” says Eric Schmidt, the chairman of Google (and a member of The Economist Group’s board of directors), “and I don’t mean a tech bubble or a valuation bubble. I mean a bubble as in our own little world.” This little world has been protected from popular anger about inequality. The popping of the bubble will be one of the biggest changes in the political economy of capitalism in the coming year.

This isn’t the first bubble and it won’t be the last. But Schmidt gets to the social issue of the bubble, disengagement. This same article gets beyond the millionaires and billionaires, but the young elite.

The oligarchs sit on top of a huge money culture: Silicon Valley is not only minting but thousands of young people who pull in more than $100,000 a year…[spending] money on sci-fi flavoured projects…

We came here to do things differently. Not for different’s sake, but because there was a better way. We wanted revolutions over old systems. Broken systems. People here call it disruption.

We were Software People up against The Man. Somewhere along the way, some of us became The Man. As the energy shifted, we saw more and more photo-sharing-coupon-marketing-analytics apps. And less disruption.

But it hasn’t been all bad. As my personal career shifted from straight-up-old-school newspaper journalism to working with startups in telephony, translation, travel and the web itself. Design became important. And I, we, engaged in politics and social change through software and user-centered design. Bringin it back to the people!

How important will design be when this fantastical iridescent sphere goes pop? Here are a few things that could happen:

The bubble will burst for everyone
Designers, no more or less than engineers, PMs, marketing and sales folks will feel the squeeze. Companies, not individuals will pop with the bubble.

The bubble will burst for designers first
Perception of designers will reshift to be seen as soft roles focused on shadow weights and illustration. The bubble will give up on color theory and not realize they’re losing product strategy.

The bubble will burst for designers later
Companies will hang onto designers as long as they can, but inflated design departments will return to 1-man shops.

The bubble will burst for everyone else
Thanks to companies like Apple, IDEO, Airbnb and Jawbone, design-driven product will remain a priority.

Realistically, all, some and none of these things will happen. But let’s at least engage in the conversation. Are we doing what we came here to do? And how should we think about the future? Sooner or later, Silicon Valley will have to pay attention to the rest of the world.

Personal Preface: It has been a long time desire of mine to work through the ideas found in Steve Freeman’s... 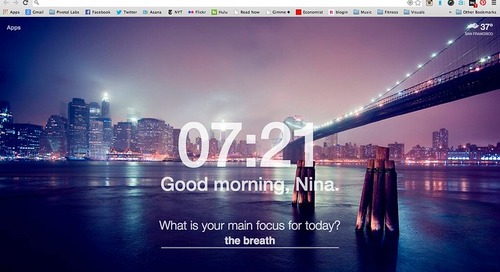 As it turns out, I’m a person. And like many persons, I too am a visual creature. Technology isn’t naturall...