The Next Evolution of North American Banking: P2P Payments

It is no secret that person-to-person payments (P2P payments) have made an impact in Kenya. Since Safaricom, Kenya’s largest mobile network operator (MNO), launched their P2P initiative called M-PESA in early 2007, Kenyans have been using it (in addition to various others) to store money on their mobile phone and transfer funds to others. It can essentially be thought of as having one’s wallet on their cell phone. Today, these mobile money platforms collectively service over 23 million users, or 74% of the adult population in Kenya, and drive 31% of the Kenyan GDP.

With the popularity of P2P payments in Kenya speaking for itself, mobile money initiatives are spreading into other parts of the world, aimed primarily at people without bank accounts (known as the “unbanked”). As recently as a few months ago, Vodafone and ICICI Bank introduced a new service in India.

In North America, while email money transfer and services such as PayPal and Venmo have been gaining traction, P2P payments using a mobile medium is still a relatively new concept and type of behavior. In this blog post, I will look at the key reasons why mobile money was able to flourish in Kenya, using Safaricom’s M-PESA as a case study, and the major factors to consider when implementing similar P2P services in North America.

In a major departure from North America, banking is quite uncommon in Kenya. According to this research report, in 2007, a mere 19% of adults in Kenya had access to a formal, regulated financial institution. This lack of accessibility can be attributed to a similar lack of urbanization in Kenya’s past; populations are quite dispersed, and banks naturally have fewer branches. As a result, those who want to bank must travel great lengths to reach a bank, sometimes to a far-off town.

Additionally, it’s normal for Kenyans move around to find higher paying work. It is common for them to send money back home, hence the tradition of hawala – a popular system of transferring payments through third-parties. P2P payments addresses this need by directly creating a bridge for money transfer. Given these factors, P2P payments quickly emerged as a solution in Kenya without disrupting the norms that people were already used to.

A well-organized and integrated ecosystem is the most important factor in creating a successful P2P solution. A fundamental hurdle in this is ensuring that there are sufficient supply (distribution network) and demand (user base) channels.

From a supply standpoint, Safaricom works with a third-party called Top Image that has been managing most of the M-PESA agent network (amongst other responsibilities). From registration, to training, to in-store operations, Top Image has made it very easy to onboard new agents whether they are an authorized Safaricom dealer, a supermarket, or a gas station. Today, there are nearly 40,000 M-PESA agents operating across the country. Competitors, such as Airtel Money, also have their own networks.

When it first launched M-PESA in April 2007, Safaricom had around 70% of the Kenyan mobile user base, making it the leading MNO in the country. Evidently, Safaricom had reach and influence, providing it not only with the user base to deploy a mobile money network, but also the trust and credibility consumers want in a company that handles their money. By early 2010, Safaricom’s market share grew to 80% – partly due to the popularity of M-PESA – and usage of M-PESA reached an estimated 40% of the entire adult population in Kenya. And just as easy as it was for agents to onboard and facilitate transactions, it was seamless for consumers to go about sending and receiving funds through M-PESA.

Additionally, within recent years, Safaricom has also brought on hundreds of partners with whom consumers have bills to settle; now, these consumers can simply pay for bills using their M-PESA account.

As previously noted, the Kenyan population generally did not bank at the outset of M-PESA. Not only were there no branches to bank at, there was very little regulation around banking. This lack of existing regulation and infrastructure played to M-PESA’s advantage, as they weren’t restricted and didn’t need to work through a ton of specifications.

Similarly, Safaricom was likely also able to influence regulation around mobile payments, due in no small part to the fact that they are partially owned by the government of Kenya. Not only was Safaricom an MNO; they were able to essentially take on the role of a bank, and facilitate money transfers and transactions.

In North America, the model Safaricom was able to implement is a far reach. While the mobile landscape may look similar to that of Kenya’s, there are far stricter regulations in banking and fragmentation in the banking market is quite evident (especially in the US).

Financial institutions in North America have a perfect opportunity to bring mobile payments to the forefront of the industry due to their market position and the trust their customers have in them. There are plenty of pains (e.g., transit, retail, splitting bills, etc.) that can be alleviated or made to be much more convenient with mobile payments.

However, much like Safaricom did in Kenya with evolving the traditional hawala system, companies will have to complement norms and current consumer behavior that are specific to North America. Because of the heavy influence of banks in North America, MNOs will have to collaborate with them to create a solid ecosystem.

To take it one step deeper, while fragmentation amongst banks as well as MNOs may be a reality, the service would have to be open-loop so that someone receiving funds does not need to be a registered user of the same P2P service the sender uses, much like how email money transfer works. While email money transfer has predominantly been used on desktop, a more mobile-intensive distribution network could be social networks such as Twitter and Facebook. For example, CommBank in Australia has had an app on iPhone and Android named Kaching since August 2011, primarily focused on P2P payments through Facebook, which has handled over $9 billion AUD (roughly $8 billion USD).

Lastly, the major difference between North America and Kenya is the technology in phones. In North America, the majority of mobile devices are smartphones which have more computing power, bigger screen sizes and richer UIs than the feature phones that are more predominant in Kenya. Needless to say, the app market has exploded since the first iPhone launched in 2007, and as a result of this difference consumers are quick to harshly rate and delete apps that are not intuitive or perform poorly. So while in Kenya, the customer experience in interacting with the agent network was critical, in this case, it is more the user experience that must be seamless and improve the way people transfer money. A successful P2P solution on mobile in North America will need to be slick in its user interface in addition to the criteria listed above.

Keeping the Console Clean in Jasmine

I like running Jasmine with the console open. It gives you insight into various errors that you may not ha... 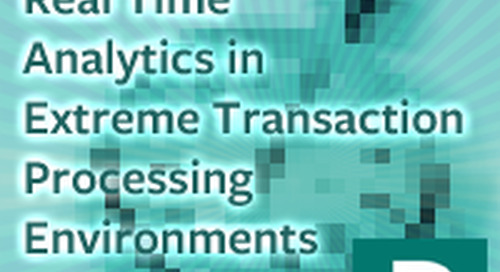 As data continues to grow, more companies are facing extreme transaction types of environments, and the nee...