The Great Divide: Reflections on the Public/Private PaaS Market in 2014 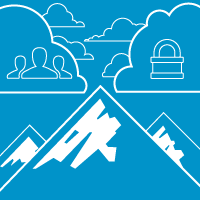 Last week we announced an important new partnership with Cloudbees to bring a native enterprise Jenkins service to Pivotal CF (PCF). This provided a first glimpse at the power of Pivotal Network, a service catalog for PCF. Pivotal Network allows any private PCF installation to import additional scalable platform services from Pivotal and a growing ecosystem of partners. PCF then manages the health and scalability of these services natively.

As Cloudbees joined the extended Pivotal ecosystem they also exited their hosted RUN@ PaaS business, which they had previously offered on AWS. In a thoughtful exit interview the talented Steve Harris compared their four year journey into PaaS market to a high risk polar expedition. As a fellow adventurer with Harris in the platform market since 2010, I would sum up my own experience and many of the conclusions of his blog with this chart: 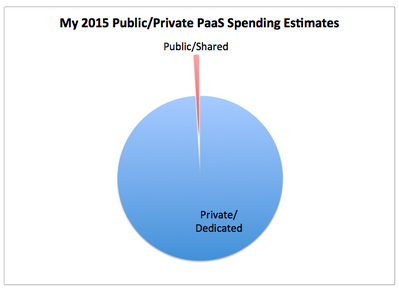 The public platform space has been a brutal market for startups. The $212M Salesforce buyout of Heroku in late 2010 was a false positive, and confused VCs. The investments became irrationally exuberant and the results were predictably bad. Public PaaS startups were too early, under resourced and focused on the wrong segment to win big in this new market. VC funded plays such as Dotcloud, Appfog, Cloudbees, and even the mobile specialists Parse and Stackmob have all since ‘pivoted’ or been modestly absorbed into larger organizations.

Deep pocketed investment by the major cloud providers such as Google’s recent free $100k for startups made it even harder for independent cloud platforms to compete or raise additional funding (all while having to pay the IaaS providers).

“There is a Cloud Foundry effect: Cloud Foundry has executed well on an innovate-leverage-commoditize (ILC) strategy using open source and ecosystem as the key weapons in that approach.”

Pivotal’s popular shared Cloud Foundry service for developers, PWS, is priced at only $2.70/month for a small hosted application. Stuck between the rapid growth of AWS, Google, and the emerging enterprise standard of Cloud Foundry there just wasn’t margin left for the hosted alternative platforms to live on.

Why Private Cloud is Different

In contrast to the startup failures in the public PaaS market, the revenue in the private platform market is significant and growing exponentially. While many enterprises are leveraging public cloud, many of the “crown jewels” applications still reside in private data centers, along with the majority of IT budgets. This means that despite public cloud adoption, architectural standards often start in the private cloud landscape and extend out.

Executing in this segment generates large purchase orders but requires shipping installable enterprise software, multi-year R&D, and a large enterprise sales force (the last two points being beyond the scope of most VC-funded business plans). The deals are large because they tap into the enormous yearly spend on enterprise middleware currently dominated by innovation laggards like Oracle’s SOA Suite. These legacy products were designed for infrequently updated applications built for vertical scaling—two trends which are now out of date. As the Harris’ blog observed:

“Pivotal Cloud Foundry has produced partnerships with the largest, established players in enterprise middleware and apps. In turn, that middleware marketplace ($20B) is prime hunting ground for PaaS, and Cloud Foundry has served up fresh hope to IT people searching desperately for a private cloud strategy”.

While public only PaaS players have continued to exit the market, private software based PCF has racked up an impressive parade of enterprise customers migrating from Oracle middleware to a next generation private cloud architecture. In June, more than a thousand enterprise users gathered for the Cloud Foundry summit, speaking to the remarkable benefits of building an application centric private cloud.

Early pioneers like Corelogic’s Richard Leurig are betting their company’s future on a next generation platform architecture and breaking down years of siloed applications on heterogeneous infrastructures. The market is waking up from years of dealing with the complexity of legacy products and demanding a cloud API integrated solution. They are also transforming their development processes to be more agile, anchored on continuous integration with systems like Jenkins. This is resulting in earmarked budgets for large private PaaS build outs. 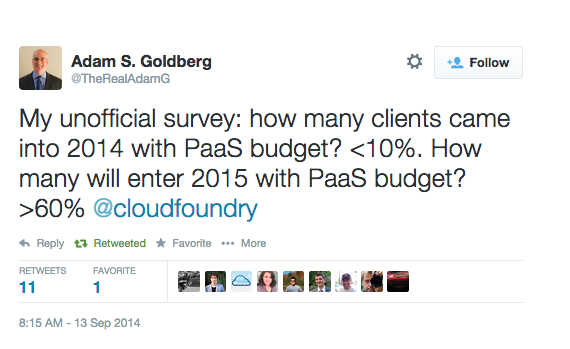 As enterprises adopt PCF, it is changing their whole concept of private cloud. Line of business developers gain immediate self service access to rapidly test and deliver applications and APIs. Monsanto observed an immediate 50% reduction in LOB development time and costs with PCF and plans to standardize the company on it in 2015. For infrastructure teams PCF’s minimal IaaS requirements and deep platform provisioning automation provides immediate private cloud features with just a few clicks and a thirty minute install time.

Customer demand to extend the platforms’ services catalog with Jenkins, Cassandra, Elastic Search, etc is overwhelming. Even enterprise stalwarts such as SAP, and SAS have announced customers are pushing them to offer their software on Cloud Foundry based private clouds. Almost every day brings an inquiry from an existing ISV whose customers are migrating to the platform who wants to be part of the PCF service catalog.

The Next Four Years of our Platform Adventure

Heading into 2015, we are hiring hundreds of additional developers, operations, marketing and sales professionals, and ramping every part of the team to take on our forty billion dollar enterprise opportunity. 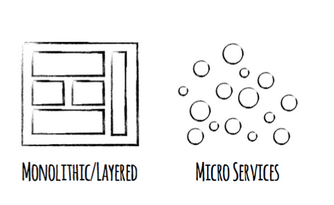 The public only PaaS meme centered on hosting, and missed the true revolution in software architecture happening in enterprises. This allowed Cloud Foundry to germinate in R&D for several years and surprise existing vendors, who prepared for the change merely by offering their existing legacy products on demand. Oracle kept its decade old middleware architecture focused on heavyweight J2EE but enterprise applications are moving from heavyweight client-server legacy model to a mobile centric paradigm dominated by REST APIs and microservices.

The production ready PCF platform has emerged as a way for enterprises to deliver on an ambitious private cloud initiative, ready for mobile APIs and microservices based applications. It delivers highly scalable, highly available services, fully automated on any cloud, with an easy to use developer API perfect for agile teams.

Using PCF is believing, and after one recent successful pilot, a bemused Fortune 50 CIO asked me, “IBM has been promising me this level of simplicity and automation for years, why are you able to pull it off while they failed?” I answered, “Only by bringing the discipline of modern cloud architecture to enterprise applications were the efficiency gains you witnessed possible. No one has ever brought a cloud native platform to the enterprise datacenter—until now.”

The next few years of this expedition are going to be very interesting! 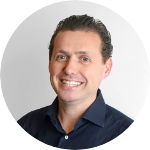 James Watters is the Senior Vice President, Strategy of Pivotal. James serves as our Senior Vice President, Strategy, where he has helped shepherd Pivotal Cloud Foundry into a highly disruptive enterprise software business, and helped led our efforts to bringing our cloud-native platform to the world. Prior to joining Pivotal, James held leading product roles at VMware and Sun Microsystems. 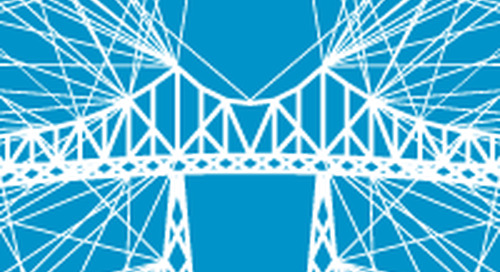 Sharethrough makes it easy to embed ads in a native iOS app, by using their iOS SDK. This SDK enables devel...