WWDC celebrated its 25th anniversary this year, and Tim Cook covered three major announcements: OS X, iOS 8 and a huge new release for developers- Swift. This three-part series of posts cover the major updates for each of these releases.

The conference opened with the “Apps We Can’t Live Without” video, a lead-in for Tim Cook to talk about the amazing apps being produced by the massive and growing developer community for Apple’s platforms. He said that the developer community increased by 47% last year, with the global total now at 9 million developer accounts. Cook also compared WWDC from 25 years ago to today: 1 lab and 1,300 attendees versus 100+ labs and more than 6,000 attendees (70% of whom were there for the first time).

Mavericks, the last release of OS X, already has an adoption rate of 51%, having over 40 million installs, which is the fastest adoption ever in any OS, across any platform (it was released in October 2013).

The new release is called OS X Yosemite (v10.10). Apple merged Mavericks and iOS7 to create a beautiful new OS UI/UX. Yosemite has all the beautiful translucent effects from iOS7 in its title bars, sidebars and dock, as well as a new set of icons for all apps. Apple also created a new translucent notification centre and added a great new feature, custom widgets (3rd party apps), right in the notification centre.

Spotlight has also undergone some changes: now when you click on the magnifying glass, OS X will display a search bar right in the middle of the screen. You can still launch apps from there by typing the app name, but now you can also type any word to perform a Google search for that word, giving you Google results, Wikipedia results, map results, etc. You can even search for documents on your Mac and it will give you a preview of the document.

Another feature is iCloud Drive: similar to Dropbox, this cloud-based service creates an accessible folder on your Mac containing all your documents, including iOS documents. It is integrated with OS X, iOS, and Windows, so all your documents will be synchronized between your devices. One of the biggest advantages that iCloud Drive has over Dropbox is that it comes integrated with the OS so you don’t need to install an extra app.

Apple also changed the Mail app for OS X: it integrates all the translucent effects that Yosemite has, but two of its best new features are Mail Drop and Markup. Mail Drop uses iCloud to send large files via email; now instead of receiving a “full inbox” email from your recipient, the Mail app sends the encrypted attachment to iCloud. If your recipient has a Mac, it will open the email just like any other email; if not, the email will have a link to download the document. Markup allows you to edit your attachments with circles, text, highlighting, and even signing a PDF file before sending it.

One of the best features of Yosemite is Continuity: the idea that whether you are using your iPhone, your iPad or your Mac, your content will be available when and where you want it. This is accomplished with a new technology called Handoff; as part of AirDrop, which now works between iOS and OS X, all your devices are aware of each other, meaning if you start composing an email on your iPhone, you can continue typing it on your Mac. It also works with SMS, allowing you to use iMessage to seamlessly send messages not only between Apple devices, but also to other phones. Even better, this works with phone calls: if someone calls you while your iPhone is charging in one room and you are working on your Mac in another room, you can answer the call right from your Mac.

Follow the links to continue reading about iOS 8 and the Swift announcements.

Shake is Hiring for Talented Technologists!

One of our clients, Shake, is looking to hire! Shake is a mobile-first agreement platform that allows peopl... 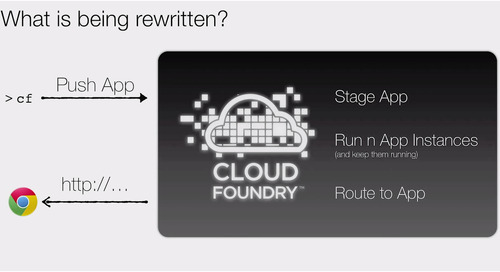 During a talk this month at the Cloud Foundry Summit 2014, Pivotal’s Engineering Manager Onsi Fakhouri unve...