Our team members Pouyan Aminian, Alex M. Chong, and Ali Taiyeb recently had the opportunity to participate in Startup Weekend Toronto EDU 2013. Here is a recap of the event and their experiences with it, as well as the lessons they learned.

It was exciting to be part of the first Education-centric Startup Weekend event ever hosted in Canada. 150 of Toronto’s most interesting individuals gathered at The Working Group’s offices in order to create awesome work in a 54-hour marathon. There were also fantastic judges and mentors from Shopify, Bitmaker Labs, and WattPad. Mentors were there on a shift-basis, and we could schedule them for office hours (which was a great source of direct feedback and advice).

Here’s a complete list of the 12 projects that made it to the judging rounds. Ali and Pouyan worked at Dollars 4 Scholars, a marketplace dedicated to connecting the various types of scholarships to qualifying students. Alex helped build Replay, software dedicated to helping parents experience their child’s school achievements and highlights. (This wasn’t Alex’s first hackathon; his team had previously won StartupWeekend Chicago with a project called Diabetes Winner, a mobile solution dedicated to make monitoring insulin intake fun and rewarding for the child and encourage good self-management habits from an early age.)

Here are a few of the lessons that we learned from Startup Weekend:

– At the end of the day, it’s not always about creating the best initial product. The judges placed much more emphasis on customer validation, business model (e.g., How can you generate and guarantee long-term viable revenue?), and making sure that the numbers made sense. A lot of good ideas fell apart because teams couldn’t figure out how to build businesses around it.

– A suitable minimum viable product doesn’t have to be a working prototype (especially in such a tight timeframe); the judges were only disappointed when teams didn’t test anything out. It doesn’t matter if you only have paper prototypes to show for it – user feedback is the important key here.

– The most critical key to success for a startup is to concisely identify a problem. Once this is done and articulated to your team, it doesn’t matter what regrouping or pivots are made – because everyone will be working towards the same cause.

At the end of the weekend, the LearningLoop team took home the first prize, Smarty Pants took second, and Fieldr took third.

Just having the opportunity to attend the competition was an exciting and enlightening experience. We all got to understand our own roles, both within our own ventures and in Xtreme Labs, a bit further. Aron Solomon, an education startup investor and judge of Startup Weekend Toronto EDU, mentioned in an interview with Techvibes that he was impressed with how “throughout the weekend it became readily apparent that there were actual education startups forming.” 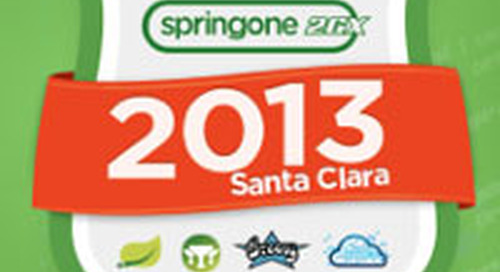 This week, I attended my first SpringOne 2GX conference, and was completely blown away. It's impossible to ...

This is the second part following this post: Creating a Service (Gateway) in CF This post will summarize: –...