This week, Matt Stine, Cloud Foundry Community Engineer, is featured in our Pivotal People series. Matt’s job brings him to the forefront of the ever-growing Cloud Foundry community, bridging the gap between customer deployment teams and engineering by using his development savvy to directly work on both sides of the fence. He is the go-to person for hard new challenges, and the engineer Pivotal leadership tapped in its early days to build out a demo of all Pivotal products, from both VMware and EMC, working together. Beyond his role at Pivotal, Matt is also the Founder and President of the Memphis/Mid-South Java User Group. Matt spent a significant portion of his career in biomedical research, healthcare, e-commerce, and retail industries and shares some of his experiences with us in the Q&A session below.

Q1 | Where did you grow up and what were you interested in?

A1 | I mostly grew up (from the age of 6) in Jackson, TN in the US. I have one younger sister (Julie) that still lives in the area while I’ve migrated a bit further south and west to the greater Memphis area. I started programming shortly after moving to Jackson when our family acquired an Atari 800. Many afternoons were spent typing in BASIC listings from the back of Family Computing magazine. By the 8th grade, I earned the distinction of “Best Programmer,” not that that means very much. I figured out how to make the U.S. flag program run with only a handful of lines of code using loop and control structures versus typing out the entire graphics display line by line. In High School, programming took a back seat to marching band, but eventually I decided I would major in computer science at the University of Mississippi. In college, my interests were fairly typical—my girlfriend and parties—but along the way I took a pretty deep interest in this new field (at the time) called “data mining” and completed a senior thesis entitled “Performance of Genetic Algorithms for Data Classification.”

A2 | While at Ole Miss, I was part of the Honors College. It required all students to participate in a research project/internship during the summer after junior year. My interest in data mining turned into an internship at St. Jude Children’s Research Hospital in Memphis, TN, working in the Hartwell Center for Bioinformatics and Biotechnology. I returned to St. Jude following graduation as a full-time software engineer. I spent the next ten years of my career there, mostly working on SRM, a management system for shared resource laboratories. I decided that I had spent enough time in the biomedical research domain and took a radical shift into retail when I joined AutoZone as a software architect in 2011. There, I helped design the next generation of their store management systems. In early 2012, VMware invited me to join its vFabric Professional Services Organization (PSO), and I spent the next 15 months working on an enormous, self-service cloud infrastructure project at a Fortune 50 customer.

Q3 | What is your role at Pivotal?

A3 | I became part of Pivotal along with the vFabric PSO. While working on that long-term engagement, I spent an increasing percentage of my time architecting and implementing infrastructure, “living the DevOps life.” During this time, I became extremely interested in Cloud Foundry and BOSH—how they solve the same types of problems we were solving on our project. I became convinced that I wanted to spend the next significant portion of my career in this area. When an opportunity came to join the newly formed “Community Engineering” team, I jumped!

Community Engineers occupy a very unique space within the Cloud Foundry organization. We spend time embedded with the core engineering teams as well as with our customers. I’ve been privileged to spend several weeks pairing with the BOSH engineering team. I’ve also been privileged to spend time with many of our early customers and perform the first ever install of our packaged Pivotal CF product “in the wild.” As well, I was asked to reach across the entire Pivotal One product organization and build a unified demonstration of the entire product family.

Q4 | What challenges does your product solve?

A4 | Pivotal CF brings “Platform as a Service (PaaS)” to the enterprise in a turnkey fashion. That sentence alone packs a punch. Operating a PaaS is a very complicated undertaking. We’ve simplified the experience. But why does that matter? PaaS platforms are what I like to call “the great enabler.” They enable IT organizations to do things that were both too difficult and costly (e.g. identical environments from development to production) or impossible (e.g. zero down time updates to infrastructure). PaaS allows development teams to quit spending 30-50% of their effort installing plumbing and glue. Instead, they can refocus their efforts on delivering value to the business. Pivotal CF is a platform for software delivery. Just like we let logistics providers like FedEx take care of the details of delivering packages to customers, IT organizations can allow Pivotal CF to take care of the details of delivering apps to customers. It’s what’s in the package that you really care about. We will handle the rest!

Q5 | What are you most excited about doing with a smaller company like Pivotal?

A5 | I’ve had the opportunity to have meaningful conversations top-to-bottom and left-to-right within Pivotal. Those conversations have had a direct impact on our products. From our executive leadership down to the individual consultant in the field, from Pivotal Analytics team members in Beijing all the way to Spring team members in central Europe, I’ve been privileged to work side-by-side with some of the sharpest engineers and leaders in our industry. This kind of thing simply doesn’t happen in an organization the size of VMware.

Q6 | How do we address the needs of developers?

A6 | So much of the Pivotal CF story is about the developer. As I’ve already stated, we want to let developers focus on building great applications—the type of applications brought on by this new world of big data and the ubiquitous connectivity that arrived with the emergence of smart mobile devices. We focus on those other critical, non-functional concerns like the deployment pipeline, provisioning, binding to data services, application instance scaling, and application health. We give each of these features a consistent, simple user experience, ultimately with the goal of giving developers their time back.

Q7 | What did you learn from working with GE as they explored Cloud Foundry?

A7 | GE was one of the initial public backers of Pivotal as a company and Cloud Foundry. As it turns out, I was able to work with GE very early on in their exploration of Cloud Foundry. They were just beginning to work with Amazon Web Services (AWS) as a target cloud platform. Together, we spun up GE’s very first private instance of Cloud Foundry running on EC2. This was a great learning experience for me. I was forced to explore many of our product’s internals to answer a long list of questions GE had about how Cloud Foundry and BOSH interact within the AWS environment.

A8 | I enjoy spending as much time as possible with my wife, Wendy, and four kids (Abby 10, Isabella 8, Ali Kate 6, Grant 5), and this usually means something as “non-geeky” as possible! I also have been an active speaker on the No Fluff Just Stuff (https://nofluffjuststuff.com) tour series since 2010. There, I teach classes on software development, lean/agile software development, and of course Cloud Foundry! I also serve as Technical Editor for NFJS the Magazine. 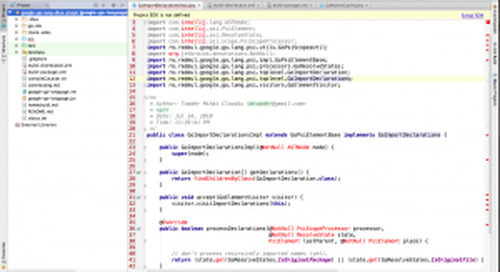 Last night I decided to take a crack at getting my environment more appropriately setup for Go programming....

The Builder pattern is an easy way to make your code more readable. The pattern is useful when dealing with...