Code for America Fellows parter with cities and various organizations and citizens within those cities to develop applications to help make city governance more accessible, efficient, effective, and representative. Now in its third year, the Code for America fellowship program boasts 28 developers, designers, civic technologists, and data scientists who have volunteered to work with one of 10 cities for the entire year. 2013 Pivotal Data Science Fellow Ezra Spier is one of those civic-minded technologists, currently developing data-driven solutions to help make New York City’s criminal justice system more fair and efficient.

Spier comes to Code for America from Portland, OR, where he was the director of technology solutions at Sustainable Harvest Coffee Importers. With his fellowship team members CJ Bryan and Doneliza Joaquin, Spier is working with New York City’s Office of the Criminal Justice Coordinator and the Arnold Foundation, a philanthropic organization dedicated to using data-driven decision making to improve the criminal justice system.

“There’s a lot of a work that can be done for people who have been arrested while they are going through the court system,” Spier explains. “We’re looking at ways that data is collected and shared by partners in the criminal justice system. When people are arrested, there are a dozen different agencies producing data, much of it in the first 24 hours. The city of NYC has done a great job of building a platform that collects that data. The apps that we’re building are trying to make this data more accessible, relevant, efficient and more fair.”

Civic technologists often lament the challenges of working with government data, which is often in non-standardized or legacy formats. Though the NYC Code for America fellows are working with a number of stakeholders and jurisdictions on this project, which presents some data collection challenges, the team has been pleased to enjoy the benefits of the city’s forward-thinking data policies. “We’re dealing with XML files, a lot of it normalized, much to our happiness,” Spier says.

“Much of that can be attributed to the fact that a lot of the systems have been built around [these needs.] NYC has a very progressive open data policy,” he says. “A lot of the open data that is released to the public in open data portals is not actually used by agencies. This is data that agencies are working with on a daily basis, so it’s much more normalized than you might otherwise get.”

Despite this, the team has encountered challenges familiar to any data scientist working with data from multiple departments or organizations. “A lot of the data that we’re working with is about incidents, and it’s coming from many sources,” Spier explains. “The first step is matching these data sources up, and while much of it is well normalized, we have to make judgment calls since we will sometimes get duplicate or erroneous records.”

This process requires the team to work with a number of metrics, such as measures of recidivism among criminal defendants, felony arraignments, and misdemeanor conviction rates, to deliver an application that serves citizens and various agencies engaged with NYC’s criminal justice system. This involves an ongoing engagement with various stakeholders, and is a learning process for the fellowship team. “We’ve done a lot of work to understand the needs of the users and constituencies,” Spier says.

The Code for America fellowship has given Spier and his team members an opportunity to work with a wide range of datasets to help improve NYC’s criminal justice system. “It’s been a really amazing experience to be a CfA fellow,” he says. “It’s exciting to take my skills as a data scientist and developer and apply them to helping people.” The fellowship has also given him an understanding of the complexities of city governance, and an appreciation of the people working within the system.

“One of the things that’s been really exciting this year is working with so many people who are passionate about serving the city that they’re working in,” Spier says. “One of the most interesting conversations I’ve had was with an officer from the probation office, and learning that they play this dual role of a officer and a counselor. It’s heartening to see how seriously the people in criminal justice take serving their communities, and how people are being innovative and finding what causes crime and recidivism. They’re really driven by making the criminal justice system better, and trying to keep people out of it.” 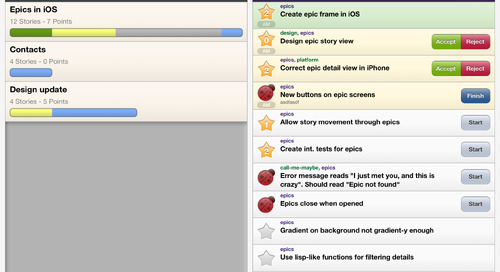 Version 1.7 of the Pivotal Tracker iOS app is now available in the App Store, with epics (finally!), as wel...

ARIA attributes are a robust alternative to arbitrary class names when applying styles and behaviors to you...