"Markdown By Default" is a great convention for notetaking 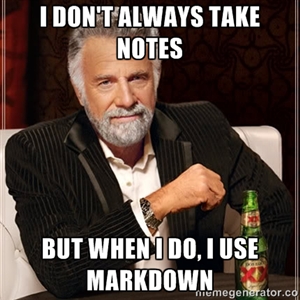 Adopting the convention of writing notes in Markdown has been hugely helpful for me. It’s an easy-to-use, easy-to-read, easy-to-learn, format for something I do every day, and a great example of convention over configuration. It helps to capture notes and events in high fidelity, at low cost. I can listen to a conversation and write almost automatically without having to think about how to structure my notes. I don’t have to decode my notes for other readers. It Just Works.

Markdown is a lightweight markup language…allowing people “to write using an easy-to-read, easy-to-write plain text format…then convert it to structurally valid XHTML (or HTML)…Markdown is a formatting syntax for text that can be read by humans and can be easily converted to HTML.

The syntax is pretty straightforward, and though it’s fairly deep, there’re a few major bits that I use all the time. Learn these two tricks and you’ll be 80% of the way to never having to re-invent your note-taking structure again:

At bare minimum, most documents have structure and content. To delineate the two, you’ll need some notion of a header. In a newspaper, examples of what HTML calls “headers” might be Headlines (“MEN WALK ON MOON”) and Subheadlines (“Astronauts Land on Plain; Collect Rocks, Plant Flag”).

Markdown has a few ways to describe headers, but I prefer “hash marks” or octothorpes. One hash for an H1, two hashes for an H2, etc.

In HTML we might describe the top-level headline as an “H1”, the subhead as an “H2”, and we can go on from there, e.g. an “H3” (“Voice from Moon: Eagle Has Landed” and “A Powdery Surface is Closely Exposed”).

I find a use for headings on almost every document: certainly to title them, and occasionally to subtitle them. Any text-editor that is aware of markdown syntax can usually give an outline view with a single keystroke, which is very useful when editing and structuring thoughts. 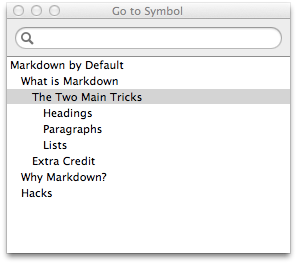 View outlines with a keystroke in many text editors.

HTML has a menagerie of lists: ordered lists, unordered lists, definition lists…the list goes on. (Actually, that’s about the end of it). Markdown lists are pretty intuitive, and (probably because I’m often recording a meeting or making to-do lists) I find myself using them all the time.

Ok, I lied, there’re three basic things. Here’s the last one. HTML has a paragraph tag, but in Markdown, to write a paragraph…you just type.

That’s it. Easy, right? This is why Markdown is so powerful: you really don’t have to remember much, but adopting a default convention means there’s one less thing to think about.

Headers and Lists will get you 80% of the way to making your notes understandable, but there’re a number of other fairly common markups I often apply to text.

There’s a lot more syntax to dig into; find it at http://daringfireball.net/projects/markdown/syntax.

Convention over configuration might be the biggest win in choosing Markdown as a default. There’s little need to pick a new structure every time you take notes. Another big benefit of Markdown is that it works in plaintext, which means its future proof. When Microsoft Word Home Office Supreme 2016 breaks all your old .doc files, plaintext will still be alive and kicking. In fact, you can use Markdown for handwritten documents; I use it all the time to take notes on index cards. There’s another benefit: when I need to transcribe those Markdown index cards, I don’t need to guess whether I was trying to write in bold or whether my pen was leaking. Better yet, transcription becomes incredibly easy: I can transcribe without processing or editing on the first pass, and then review my work, process, edit, and do all sorts of other writerly things. This doesn’t sound that impressive, but I’ve found it to be a huge time-saver.

In addition to the straightforward benefits of using Markdown as a default, I’ve also evolved a number of hacks: 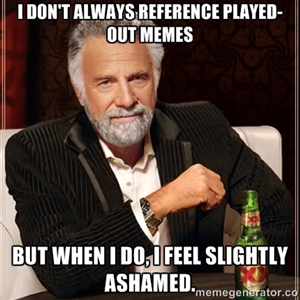 So that’s the How and Why of my Markdown habits. Do you use Markdown? Do you have a system for notes? Let’s hear about it in the comments!

Why You Should Test in the Real World

One of the most overlooked, yet reliable, ways to truly test your code is to get out of the office. On a fi...

In order to get some pivots up to speed on Rails 4 in anticipation of our clients’ needs, we’ve been upgrad...