Docker provides a simple and convenient way to package an application and deploy it in isolation on a target machine. But what happens when you want to deploy multiple containers in multiple machines? How do you monitor the status of your containers? How do you deal automatically with stateful data when your containers or the virtual machines hosting the containers fail?

Learn in this article how Cloud Foundry BOSH can help you to orchestrate your multi-node containerized applications on your choice of IaaS, manage its lifecycle including stateful data, while providing monitoring, alerting and self-healing capabilities.

OS level virtualization (aka containers) is not a new technology, it has been floating around for a while, but lately it has been a hot topic since Docker came to the scene. But what makes Docker so special if it is just a wrapper of an old approach? I would say that basically is due to, but not only, its social aspect: being able to build a consistent application container, from scratch or reusing a layer from other container image, and share it in an easy way, via a Dockerfile or via the Docker registry, with the rest of the world is a really amazing capability and it is what made Docker so popular.

On the other side, Platforms as a Service (PaaS) technologies have been one of the earliest adopters of containers, as PaaS usually require:

So it is clear that PaaS and containers are a good match. But although various PaaS platforms have implemented their own way to package and deploy an application in a reusable way (i.e. Buildpacks in Cloud Foundry), recently there have been some efforts trying to integrate Docker images or Dockerfiles with Cloud Foundry. The Cloud Foundry engineering team is working on Diego, with a clear mandate to make it relatively easy to support multiple platforms, including Docker; and in parallel, our friends at CloudCredo are experimenting with Decker, a reimplementation of Cloud Foundry DEA’s using Docker as a backend.

But while the work to support a Docker image with “cf push” is still under development, we have been searching for a way to make it possible to use Docker images now using existing Cloud Foundry APIs. So today we want to introduce and release as an open source project an experimental project: a CF-BOSH release for Docker.

Why is this CF-BOSH release so “awesomic”?

Let’s take a depth look at each of these features:

Become the director of the Docker Orchestra!

First, at the “jobs” section of the CF-BOSH deployment manifest, we declare how many jobs we want to deploy. Each “job” will become a virtual machine, and on every virtual machine we need to install 2 templates. The “docker” template will install the Docker bits and will start the Docker daemon. The “containers” template will install and start the specified Docker containers.

And if you prefer to create a custom Docker image instead of reusing an existing one, you can also set the Dockerfile:

For a more detailed list of options, check the README at the Docker CF-BOSH Release github repository.

Let’s see this in action. We are going to deploy 3 different services (Redis, MySQL, Elasticsearch) running in containers on a single virtual machine hosted at Google Compute Engine. For Redis and MySQL we are going to use pre-baked Docker images (fetched from the public Docker registry), and for Elasticsearch we are going to use a Dockerfile with instructions on how to built the image, so it will be built on-the-fly while the container is deployed. We will also test that we can connect from our local laptop to the services running inside containers on the virtual machine.

The Docker CF-BOSH release monitors not only that the Docker daemon process is up and listening, but also monitors that each of the deployed containers are also running. If for some reason the Docker daemon or one of the containers dies (because the application exits abnormally or because we accidentally killed the wrong PID), CF-BOSH will automatically detect the failure and it will restart again the processes without any human intervention until it success.

Let’s see this in action. We will ssh into one the virtual machines hosting our Docker containers and we will kill manually a process running inside a container to see how automatically, and after a just few seconds, CF-BOSH is going to restart it. Then we will repeat the same exercise but killing the Docker daemon instead:

OMG, my VM’s are ephemeral!

A common scenario in cloud infrastructures is that you need to deal with ephemeral virtual machines. Your instance can fail, you accidentally destroy the instance, or simply, your IaaS provider decided to kill your instance because it must perform some maintenance tasks (AWS I’m looking at you!). In those cases, CF-BOSH will automatically create new virtual machines to replace the missing instances.

There is a component in CF-BOSH, named “Health Monitor”, that periodically pings a CF-BOSH agent running inside the virtual machine to check its state. If for some reason the Health Monitor is unable to contact the CF-BOSH agent (because the virtual machine is “gone”), or the state of the deployment in a particular virtual machine is not what CF-BOSH is expecting, then it will trigger an alert. The alert then is passed through a list of responders (email, pager, …). But there is a special responder that performs the health management, the “resurrector”. The resurrector will automatically communicate with the IaaS and will ask that the failed VM be replaced, and once this is done, it will reattach the existing persistent disk to the virtual machine, and then it will deploy and start the processes again.

Creating and attaching a persistent disk to a virtual machine is an easy task, but initially sizing the disk correctly is not. Our service becomes really popular and starts generating lots of data, or we could miserably fail on our expectations and we need to decrease the size of our deployment to not incur in more costs. How can we then resize the disk without losing any data? CF-BOSH can also help here!

Let’s see this in action. With a simple modification in our deployment manifest (the size of the persistent disk), CF-BOSH will resize our data partition without losing any data:

As the project is open source, we encourage our community to contribute to the project with whatever ideas to make this CF-BOSH release even better. What would be uber-cool? Adding a private Docker registry to the Docker CF-BOSH release, so you can host your already pre-built Docker images in your very own private image depot. Or adding a service discovery mechanism, so you can link containers hosted in different virtual machines.

If you’d like to learn more about CF-BOSH, see the CF-BOSH documentation website and/or check the source code at our github repository. For any specific questions about CF-BOSH or the Docker CF-BOSH release, use the CF-BOSH Users Google Group.

Bonus: Do you want to manage Docker resources, including containers, images, hosts, and more all from a single management interface? Then try also our Shipyard CF-BOSH release! 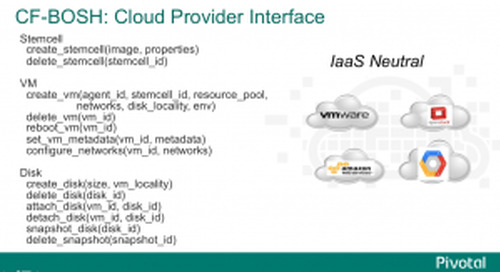 Do you want to to deploy a full Hadoop Cluster on Google Compute Engine in under 3 minutes? Would you like ... 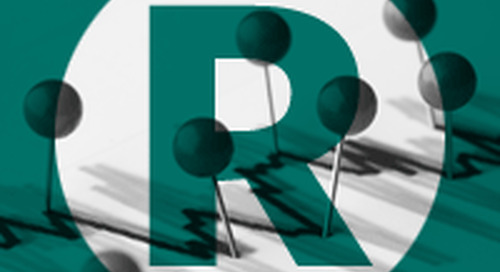 Wouldn't it be great if there was a way to harness the familiarity and usability of a tool like R, and at t...