I’m obsessed with remote pair programming and remote collaboration. I’ve even given tech talks about remote pair programming. Most teams with which I’ve worked remotely are small — usually around four to six team members total — but for the past 10 months I have remote paired on a project of up to 30 developers. While the majority of the team was co-located in our NYC office, five of us were remote. Over that time we have tried many different remote collaboration and pairing setups and feel we’ve settled on a configuration that supports daily pair rotation with minimum overhead.

We set up a team Skype account and paid for Skype group video. Each morning the team would gather for standup in a large conference room and call us from the group video account. 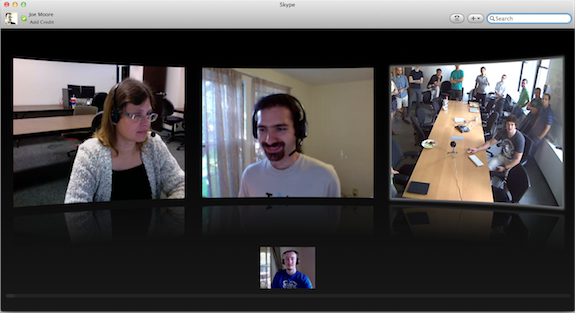 It can be difficult for the remote members to hear everyone in such a large room. We used a Blue Snowball mic to aid with this, and it worked well so long as nobody unplugged it.

We had a team whiteboard where we would list technical tips, tricks, and cries for help. Every day someone would send the group a photo of the board. I’m sure we could have come up with a more technical solution but this has worked well for us, though it does take some extra effort.

If remote team members had items for the standup board they would simply speak up towards the end of the meeting; a scribe was taking notes and emailed them to everyone afterwards.

We settled on having dedicated remote pairing workstations in the NYC office, one for each remote developer. This is a departure from the norm. At Pivotal we swich pairing stations frequently and nobody (or everybody) “owns” a particular machine. For practical reasons the remote person really needed to own a single station to make remote pairing as efficient as possible.

Remote pair programming often requires a bit of setup: configuring Screen Sharing, setting up tmux, launching and logging in to Skype, etc. With dedicated remote pairing stations this setup can be done once early in the project and (usually) left alone. Time spent on this overhead is minimized, and pairing could start immediately.

At Pivotal Labs, our offices have an open floor plan. To find someone you need only stand up and look around for them. But what about when you need to talk to Joe-in-Atlanta? Who’s he pairing with today?

A dedicated workstation for each remote developer becomes their virtual presence in the office. Everyone on the team knows where to find Joe-in-Atlanta. This is important not only for other developers, but also for product manager, project managers, designers — the entire team. My station was called “Little Atlanta” and we referenced it often in conversations: “Joe, I need to talk to you after standup today. I’ll meet you at Little Atlanta in a few minutes.”

Occasionally two remote developers would remote pair for the day. What did we do then? We usually chose one of our dedicated NYC office stations and paired through that machine rather than our local (that is, home) machines. Why? Just as if we were physically in the office we wanted other developers to be able to see what we were doing and help us if needed.

We made ourselves available by setting up a group Skype call between ourselves and the workstation “Skype laptop” and letting everyone know where we could be found. This worked very well. Using this video conference we could ask for help and team members could seek us out as well. 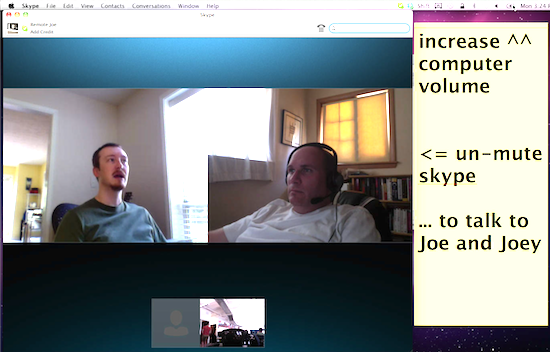 A Review on Reviews: Google to Allow Developers to Answer Users in Google Play

Google Play, the primary Marketplace for everything Android, is about to change the way we review apps. Goo...