If your product team were Chess pieces

The game of Chess is a Kingdom’s of strategy, problem solving and battle together in conquest. The pieces and tactics in the game of chess are not so different than those on a product team, just hopefully less bloodshed.

The King (♔, ♚) represents your Users.
They can move in any direction, but only one square at a time. Without them you have lost the game; you’re just moving pieces around on a board.

The Queen (♕,♛) is your CEO.
They can move in any direction, any number of squares. This player is most powerful, and can easily transfer firepower and control the opposition.

The Rook (♖ ♜) is your Product Manager.
They have limitless horizontal and vertical movement. They can safely exert control of the board and have a special relationship with the King.

The Knight (♖ ♜) is your Developer.
They move in a two-step, one-step L shapes-shaped direction. Their power comes from jumping over pieces in closed positions especially early on.

The Bishop (♖ ♜) is your Designer.
They have limitless diagonal movement. They are underrated by beginners and gain strength as the board opens up with their power of influence.

The Pawn (♙♟) is Marketing.
They advance only forward a single square except twice in their first move. They are the front-lines and promote to any piece if they reach the opposing edge of the board.

The positions of the Pawns (Marketing) can determine the flavor of the entire game. Similar to brand strategy and community development, they’re the only piece that doesn’t attack head-on. If a Pawn can endure the length of the game and reach the other side of the board unscathed, a Pawn is promoted. It’s most common to promote the piece to a Queen (CEO) adding significant charge to the board.

The Queen is most powerful when the board is open, when there is not much product competition or an unsolved problem or need. She can swiftly change direction and seize control, even at long distances. Experienced players know to develop minor pieces in the beginning and make this piece more active in attacks later on.

Surprisingly, two Rooks (PMs) are more valuable than a Queen. They are often blocked in the beginning of the game by other pieces but when opened up the two together can seize control of the entire board. They are good for pawns advancing for promotions but also are at high risk of pawns in opposition.

The Knight (Developer) and Bishop (Designer) are equal in value but differ in power. The knight is especially powerful at the beginning of the game as it can get out on the board and make strong attacks, and build a good framework for the game, even in tight situations. Two knights are not said to work together as well as two Bishops (designers) because of the how they move and strategize.

However, near the end of the game, the Bishop becomes extremely valuable, especially in pairs since it can influence the entire board (unlike the Knight) and can introduce long term threats (like killer user experience or usability) for an advantageous endgame.

Of course, in Chess, the opponent is simply another Kingdom, rather than competitors and technical, societal and political barriers. The ratio of players on the board differs than that of a product team but there sure are some tried and true strategies that have worked for this game over 13 centuries. 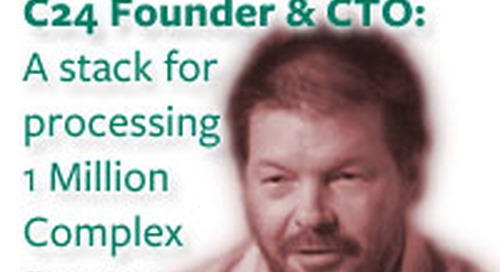 Breaking the Benchmark: Moving from 20K to 1 Million Complex Events Processed Per Second