EMC World is in its second day in Las Vegas, and attendees are becoming acutely aware that they’ve gotten far more than they bargained for at this event. Permeating through many of the news announcements, keynotes and show floor demos is the term ‘Federation’, referring to the unique partnership between EMC and three of its companies, VMware, RSA and Pivotal.

Each company, free to operate and execute independently, revealed this week a slew of announcements that shows coordinated effort and progress on addressing one of the mega trends in the industry—where the cloud, mobile, social and Big Data are intersecting to create a new era of opportunity for industries to seize competitive advantage. Yesterday, EMC and Pivotal joined together to announce the new gold standard for doing Apache Hadoop in the enterprise, combining decades of engineering around Greenplum, Gemfire and Spring on EMC Isilon storage to help companies scale faster and extract more value out of big data workloads and applications. Meanwhile EMC also spent the day discussing it’s innovations with VMware on the Hybrid Cloud, including launching a new EMC Elastic Cloud Storage (ECS) Appliance that when run internally is 28% cheaper than public cloud alternatives from Amazon and Google.

Today, VMware and Pivotal share that we have co-developed the integration of VMware’s vCloud Hybrid Service and Pivotal CF to provide developers turnkey enterprise-grade PaaS capabilities across both public, private and hybrid cloud environments.

Besides underscoring that the Federation is making big progress across the board toward solving holistically the challenge of building, deploying and scaling modern applications, this announcement is a big win for developers and operations teams who rely on VMware to power their data centers. It means these organizations can now scale with a single command, and update without downtime. It means they can use Pivotal CF’s operator and deployment capabilities to benefit from the consistent management, security and resiliency of a VMWare’s hybrid cloud infrastructure. It means development and deployment of applications just got a lot simpler, and, importantly, opens up choice to use public clouds, private clouds or both.

Hatched at VMware years ago, it is no surprise that VMware is a supporter of Pivotal’s Cloud Foundry project. Spun out with the Pivotal organization last year, VMware has continued to work with the Cloud Foundry team to ensure Pivotal CF runs on VMware’s stack as a first class citizen, ensuring that their users have a clear path toward embracing the power of PaaS, and derive the most value from their software infrastructure.

At EMC World? Come Find Us!

You can hear more about this exciting milestone by either attending or watching a live stream of Pat Gelsinger’s keynote at EMC World today at 10:00 AM PT. In addition, Pivotal and VMware are demonstrating Pivotal CF running on vCloud Hybrid Service at booth #226 at EMC World this week. Additionally, you can read the press release here. You can see it as part of the Build a Hybrid Cloud demo, or try it out yourself using a guided or self-paced vLab at the event. More information on the vLabs is available here: http://www.emcworld.com/emcvlab.htm 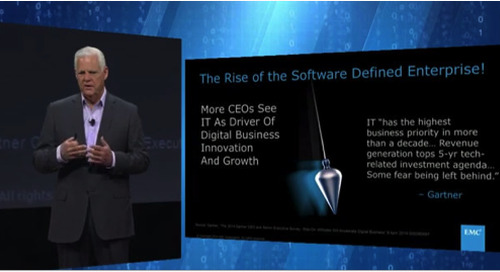 Media Summary of Key Takeaways from EMC World: Growth, The 3rd Platform, and the Federation

As EMC World wraps up, attendees and journalists have buzzed with key questions and perspectives regarding ...

Nick Quinlan from SendGrid discusses some of the advantages of SendGrid as well as many tips around improvi...