No matter how much data you amass, or how ingenious your models may be, your efforts are only as effective as how you communicate the insights revealed. Data visualization is not a new art, but one which has grown significantly more important in recent years, as organizations must respond to an increasing amount of data faster than ever.

Two recent articles demonstrate the wide range of uses for data visualization — from business intelligence to social advocacy — and how form and function vary widely depending on the data visualized and the intended purpose. Co.Design features Periscopic, an information design studio that uses visualization as a persuasive storytelling form ripe for innovation and experimentation. In contrast, a recent Harvard Business Review article details Procter & Gamble’s flexible yet robust framework of visualization tools, designed to rapidly deliver actionable business insight to decision makers.

Despite the ascent of the form, the notion of telling stories with data visualization was a tougher sell when Periscopic formed in 2004. At the time, co-founder Kim Rees explains to Co.Design, “We were seeing more interest in large databases, but there was a lag in the sense-making part of it.” Still, Rees and her partner Dino Citraro had a sense of the coming data deluge, and knew they were on to something. “If you store a lot of data it does you no good unless you can understand it,” she says.

Periscopic became an in-demand information design firm and advocacy group by building tools that demonstrated their vision, telling stories out of complex sets of data through interactive interfaces which fostered agency and engagement among users. Rees tells Co.Design that Periscopic’s “goal is to communicate what the data is saying and allow people to have their own ownership of that data.” Conversely, the studio produces starkly simple interface when the topic demands such an approach. One exemplary recent examples of this is Periscopic’s sobering animation of the years lost to gun deaths in the U.S., which drives home the human toll of each individual death, rather than taking an approach that abstracts the statistics.

In terms of subject matter, methods, and intent, Procter & Gamble’s robust analytics platform differs widely from Periscopic’s work. Its “Decision Cockpit” is accessible by over 50,000 decision makers within the company, clearly presenting a profusion of critical information on business operations. The dashboard is instantly accessible and highly visible in management meeting rooms in over 50 Procter & Gamble offices.

The company’s CIO tells Harvard Business Review that the purpose of its analytics platform is to turn data into knowledge and results, by “getting beyond the what to the why and the how.” A global company with a huge portfolio of products, Procter & Gamble’s management need tools that let them drill deep into the minutiae of a particular market, without losing sight of the bigger picture. IT Director Guy Peri explains, “With visual analytics, we are able to quickly focus business decision makers on the businesses issues that are material.”

Despite the vast differences, both Periscopic and Procter & Gamble demonstrate that there is no single set of techniques for effective data visualization. Form must not only follow function, but also context and intent. Read more at Co.Design and Harvard Business Review, which is running a month-long series on visualizing data. 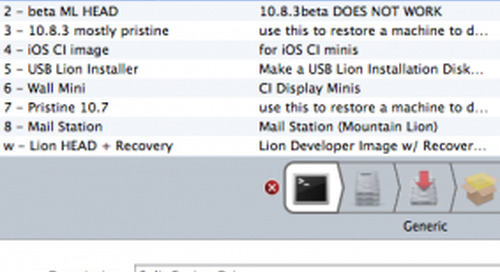 A DeployStudio workflow for late 2012 iMacs

We faced challenges when first attempting to deploy images to our late 2012 iMacs with Fusion drives. You m...

A Roadmap for FTC Compliance Requirements for Mobile Apps