Doing More With Data at the Data Science Summit 2013

The significant growth of the Big Data space and the increasingly prominent role of data science took center stage this week at DataBeat’s Data Science Summit 2013, presented by Pivotal and VentureBeat in Redwood City. While there’s been plenty of discussion in recent years about data’s potential, the speakers at the Data Science Summit eschewed the hypotheticals in favor of the value, insights, and challenges realized by enterprises and practitioners today.

Richard Snee, Chief Marketing Officer at Pivotal and Chair of the Data Science Summit, set the stage in his opening remarks on Wednesday, December 4th. Scott Yara, Pivotal’s Senior Vice President of Products and Platform, followed to present the keynote, during which he emphasized that the future of data science lies in the relationship between data-driven insights and application development.

Realizing this value will require close and ongoing organization collaboration between data scientists and software developers, Yara stated. The “forever together” relationship between app development, data and analytics fuels a “cycle of continuous value creation,” Yara explained. “Analytic insights from that data drive new app functionality, which in-turn generates new data,” he said. “The faster you move around this value cycle, the faster you learn, take action, and win.”

Achieving these goals will require more than internal collaboration between different teams within an organization, Yara said. It will require cooperation among the various players in the industry, particularly as open source projects like Hadoop are fundamental to this value chain. “Our most critical technology investments are all based on open source technologies,” he said, calling for strong standards to be adopted industry-wide. Moreover, companies, countries, academic institutions, and other practioners should collaborate to realize new opportunities and avoid data silos and the duplication of efforts.

During a lightning talk, Kaushik Das, Pivotal’s Senior Principal Data Scientist shone a spotlight on the company’s “Data Science Dream Team”. While introducing Pivotal’s top-tier data science practioners, Das shone the spotlight on a number of the team’s engagements with clients. Doing so, he and the team’s demonstrated data science’s significant impact across a swath of industries, from healthcare to financial services.

The vibrancy and variety of data science applications was demonstrated throughout the Summit, from Mailchimp processing 500 million messages a day using Redis as a fast storage platform, to Infomotion Sports Tech’s “smart basketball” which includes nine web-connected sensors.

Internet of Things applications received a considerable amount of attention, particularly during a power lunch session hosted by Pivotal data scientists Vivek Ramamurthy and Rashmi Raghu. Identifying the Internet of Things-enabled devices as “the next Big Data wave,” Ramamurthy and Raghu discussed the implications of this revolution taking place at industrial scale. In the case of Pivotal investor General Electric, data science has become a critical part of the company’s $70 billion jet engine business, which uses data-driven insight to optimize fuel efficiency and performance.

More takeaways and insights from DataBeat’s Data Science Summit 2013 can be found on VentureBeat and by following #databeat on Twitter. 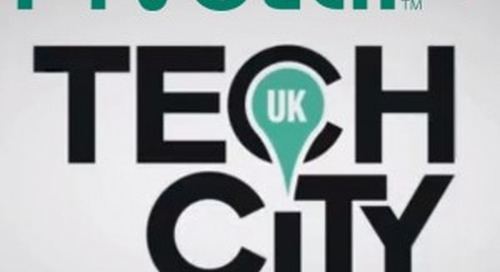 Pivotal announced a significant investment in Tech City UK today, to take place over the next decade. Locat...

Maybe you learned this from experience or you joined a Rich Hickey-esque immutability craze, but one way or...