App dev and test is a key use case for the cloud, David Linthicum wrote recently in InfoWorld. According to the Evans Data Cloud Development Survey, conducted in December and released in February, cloud platforms reduce overall development time by an average of 11.6%. Citing this survey, Linthicum noted that not all developers are convinced that using the cloud for development saves them time. Nearly half of the 400 developers surveyed – 48% – said that app dev and test in the cloud is saving them time. The question was how much. About 38% said that it cut development time by 11-30%, 10% said it made them more than 30% more efficient, and another 10% said they didn’t see any efficiency improvement in using the cloud.

Other benefits from developing in the cloud included easier collaboration when using the cloud, but concerns about the security of source code also surfaced in this survey.

Linthicum expects that using the cloud for application development is going to explode in popularity because it has such a serious payback. The ability to spin up dev and test environments inexpensively makes it possible to experiment and innovate with very low investment, especially compared with deploying hardware in your own data center for these purposes. We have to wonder if the developers who reported no faster application development were thinking only of their development tasks, not the time it takes to acquire and stand up hardware for dev and test in house.

Linthicum makes an important point that we echo: if you’re not experimenting with cloud-based app development, you should be.

The Benefits of Enterprise App Stores

With the growing reliance of companies on mobile devices and apps, enterprise app stores – stores accessibl... 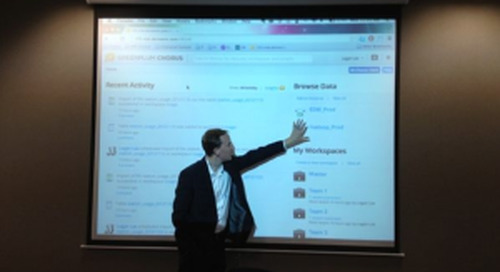 Over the past few years, organizations like Data Science London have sprung up in major metropolitan cities...