I recently returned from a trip to Egypt with Pivotal’s own Lara Owen. Like all good tourists, we went and saw the Pyramids of Giza. Like far fewer tourists, we also went to Saqqara to see the Step Pyramid and then on to Dashur, home of the Bent Pyramid and the Red Pyramid.

In the 3rd Dynasty, the Step Pyramid is constructed under the rule of Djoser. The pyramid has entered the market. By the 4th Dynasty, under the rule of Snofru, six steps are no longer enough, users want seven steps and smooth sides. 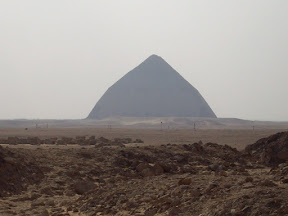 In an attempt to meet these new market demands, the Bent Pyramid construction begins. Half way through, they realize they made a mistake, and adapt their plan accordingly by changing the angle down from 54° to 45°. The next attempt, still within Snofru’s lifetime, becomes the gold standard of pyramids and is known as the Red Pyramid. With it’s consistent sloping smooth sides and added height, this pyramid was fit for any king. 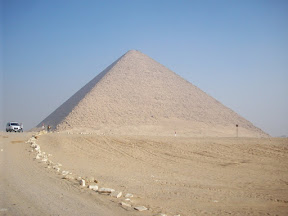 What I thought about, as you might have guessed by now, was the methodology used to construct each of these pyramids. In the case of the Step Pyramid form the 3rd Dynasty, it would be easy to see a king proclaim, “I want this kind of pyramid and I want it ready by the time I die.” And he’ll get something twenty years later that resembles what he wanted twenty years ago.

Snofru had a different plan. He was going to shake up the way people think about royal tombs. He was going to do something no one else had done. This man of foresight said to his people, “We will release early, and we will release often. We will have meetings along the way to reflect on how we have progressed, and we will then plan ahead only as far as is practical, adjusting as we go. Most importantly, we will trust each other such that mistakes can be made without causing great harm to the project.” It was with this spirit that Snofru began work on the Bent Pyramid.

He didn’t know what he was doing, there was no model to copy, no patterns to solve this problem. So he guessed 54°. And they built, and they talked and said “Hey Snofru, this looks great, but it won’t be stable if we continue at this angle.” To which Snofru probably replied, “I will trust your expertise here, can we make the angle less steep and see how that works out?” So 45° it was.

When the finished, they stood back and looked at the work they had done. It was taller, and it did have smooth sides, but it wasn’t quite right. Snofru, being a wise king, knew that this was a great success.

Snofru still had plenty of time on his hands, and because he released early instead of letting construction drag on, he had new insight from the retrospective that he wouldn’t possess otherwise. So he built the Red Pyramid with complete success.

Snofru was, in my opinion, the first adopter of Agile principles. His “employees” trusted him enough to be able to push back when the plan needed revising. He trusted them right back not to yank his chain about things being too steep. He made his mistakes up front, which taught him lessons about his domain, and it enabled him to be successful in the long run.

Pivotal NYC was lucky enough to have Ben Stein in the office to give a beta presentation entitled "Beyond t...

At stand-up this past Monday after the whirlwind of the holidays, our team anchor encouraged us to pair wit...