A Robot Gave Me My Job!

“A robot took my job!” The familiar refrain gets at a long-running cultural anxiety that machines will render human workers redundant. “My father had worked for the same firm for twelve years,” begins a memorable gag from Woody Allen’s early standup career. “They replaced him with a tiny gadget, this big, that does everything my father does, only it does it much better. The depressing thing is, my mother ran out and bought one.” But according to a recent Economist article about the role of big data and predictive analytics in Human Resources departments, an increasing number of workers may instead have reason to declare, “A robot gave me my job!”

The notion of machine-aided HR departments might seem troubling to some job seekers, evoking a future where algorithms cull through countless resumes for candidates that fulfill a pre-selected set of metrics. Yet the approach is revealing surprising correlations that not only identify promising job candidates, but may benefit prospective employees in unexpected ways.

Some of the correlations are intriguing yet untested — for example, candidates who apply for jobs using a non pre-installed web browser like Chrome or Firefox tend to perform better and stay at jobs longer. But deep analysis of a wealth of applicant and HR data can also reveal insights that meaningfully contradict deeply ingrained HR biases:

For instance, firms routinely cull job candidates with a criminal record. Yet the data suggest that for certain jobs there is no correlation with work performance…Likewise, many HR departments automatically eliminate candidates who have hopped from job to job. But a recent analysis of 100,000 call-centre workers showed that those who had job-hopped in the past were no more likely to quit quickly than those who had not.

Other insights seem to make sly, intuitive sense — on the whole, honest people tend to be more productive and dependable employees, but less effective salespeople. And as the article details, biases and human error can still taint the accuracy of results. But for many job seekers, data mining and algorithms may increase, rather than limit, new opportunities. Read more at The Economist. 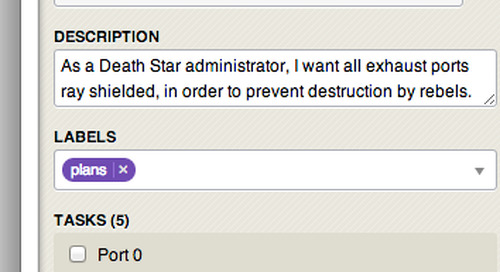 As a feature story progresses through the Tracker workflow, a lot of testing activities are also underway. ...