After Jared’s excellent introduction to Go concurrency and his look at patterns of Go channel usage I would like to share a channel-based ring buffer in Go based on channels that we developed for the Loggregator Server in CloudFoundry (CF).

The goal of Loggregator is to allow application developers to tail the logs of their applications when these are running on CF. The central component of this is the Loggregator server which routes incoming messages. One of the key requirements for this server is that all developers get their logs fairly and that a malicious developer can not cause message loss for other developers by writing very fast loggers or really slow log consumers.

The following drawing shows the basic mechanism of message distribution (every sprocket is a goroutine). Messages come into the system on the left and are processed by the main processing loop which determines whether a message ids match and should thus be forwarded to a particular consumer. Every consumer forwarder has an internal incoming queue, which it takes messages out of to forward to the external consumer. 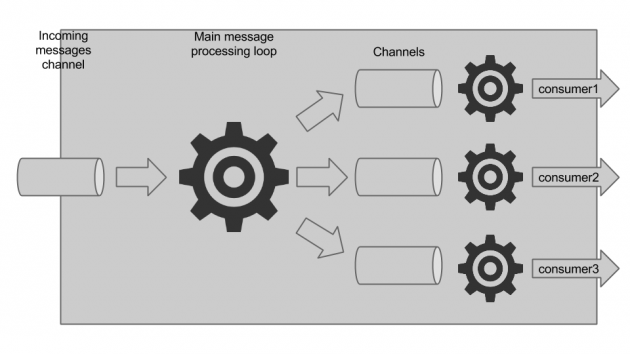 Congestion in a naive implementation

If a consumer, say consumer 1, slows down it is going to fill up its incoming channel over time. When it is full that channel will block the main message processing loop. A buffered channel will cause the same problem when the buffer runs full. 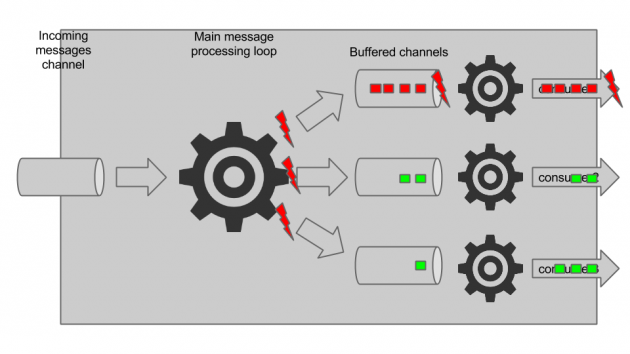 Channels and goroutines to the rescue!

In the following code snippet we are use int as our messages.

Plugging in this “channel struct” will never block and will simply behave like a ring buffer. That is, slower consumers might loose (their oldest) messages, but will never be able to block the main message processing loop. 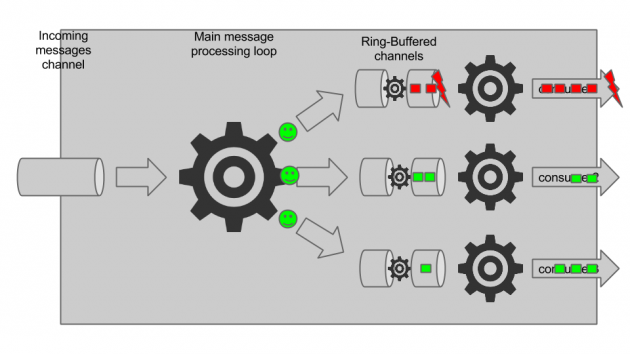 Here is this idea at work in the Loggregator server source code.

A few packages are available that implement ring buffers in a more classic way by using slices and moving pointers: e.g., container/ring and gringo.

The problem with these implementations is that they need locking to be used concurrently. In the case of container/ring proper locking needs to be ensured by the user of the package. In the case of gringo you will see extensive locking throughout the package when looking at the source code.

While working on my personal project in Golang, I ran into the usual withdrawal symptoms that any pivot exp...

Why the Xbox One will Take Over the Living Room

Co-authored with Paula Kwan   The day we’ve been waiting for has finally arrived: today, November 22, marks...